Dhiraagu receives 2 awards for contribution in development of Maldives’ tourism 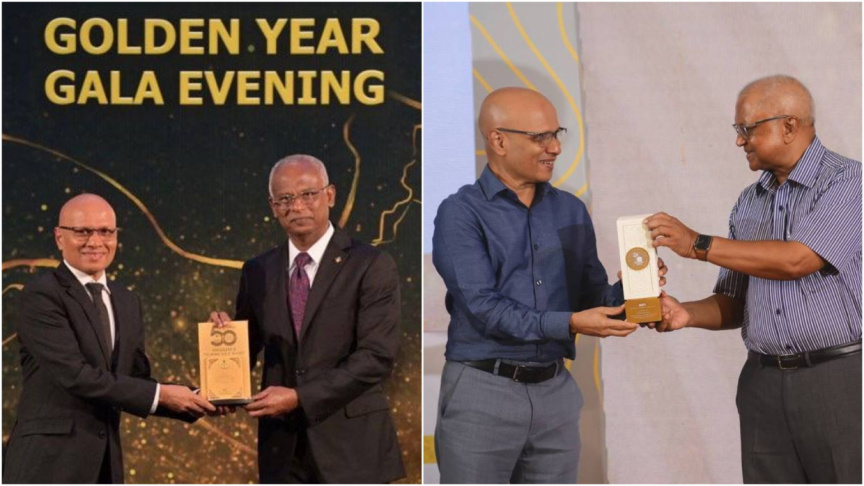 Dhiraagu presented two awards in recognition of contributions to the development of Maldives' tourism industry.

Local telecom operator, Dhiraagu, has been presented with two awards in recognition of the company’s contribution to the development of the Maldivian sector.

The company was presented with ‘Tourism Appreciation Award’ during the ‘Tourism Appreciation Reception’ held at Crossroads Maldives on last Thursday night, organized by the government and Maldives Association of Tourism Industry (MATI). They also received the President’s Tourism Gold Award, bestowed by President Ibrahim Mohamed Solih during the Tourism Golden Year Gala Evening held at Kurumba Maldives on Monday night.

Both events were held as part of the celebrations of the 50th anniversary of Maldives’ tourism sector.

The awards were received by Dhiraagu’s CEO Ismail Rasheed, on behalf of the company.

Dhiraagu said that both awards recognized their role in the growth and innovation of the Maldivian tourism industry, brought about by the company’s development of the Maldives’ telecommunication sector.

Expressing extreme honor for having received both awards, Dhiraagu thanked the government and the tourism industry for the recognition.

The company stated that they remain committed to supporting the hospitality industry in its upwards journey through the digital age, enriching the lives of people living in the Maldives and visitors alike in their capacity as the digital transformation partner for the industry.