Imam who delivered sermon in Addu dialect has permit suspended 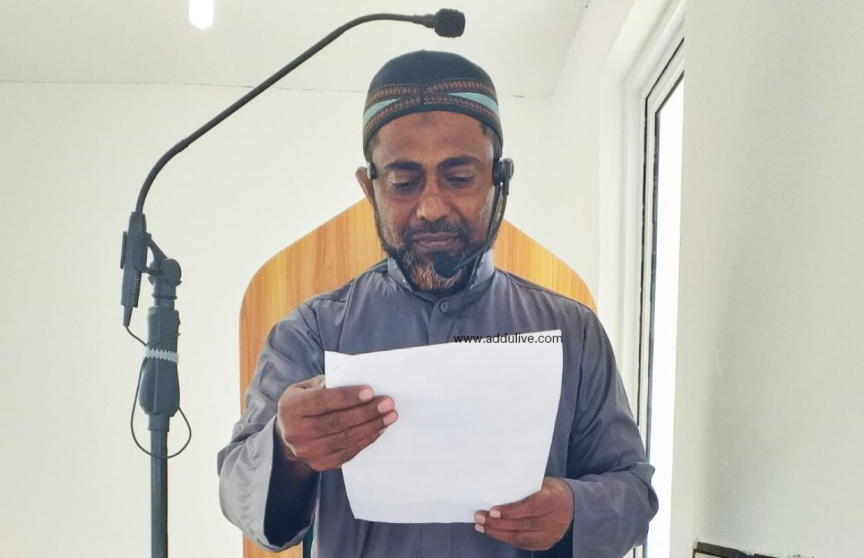 The permit issued to Mohamed Rasheed, an imam from Addu’s Meedhoo, to lead Friday, Eid and eclipse prayers had been suspended.

The penalty comes after Mohamed delivered the Friday sermon in Addu dialect at the Masjid Majudhudheen on September 2.

In a letter to Mohamed, the Addu City Council said the Islamic Ministry had informed the council his actions violated Article 9 (c) of the regulation for issuance of permits to lead Friday, Eid and eclipse prayers in Maldives.

The council said the Islamic Ministry had instructed the council to stop assigning Rasheed to lead the prayers, and that the ministry would reprimand him.

The ministry said the repetition of the violation will result in cancellation of permit, said the council.

Mohamed, who had been suspended over the incident, said he delivered the sermon in Addu dialect because there were elderly people and migrant workers who did not understand the Male’ dialect.

Following backlash over the decision, President’s Office spokesperson Miuvaan Mohamed said the imam wasn’t suspended because he delivered the sermon in Addu dialect, but because he violated Islamic Ministry’s policies.

“Its in the policies that the Friday sermon delivered in all islands must be the one pre-approved by Islamic Ministry. That no changes must be made. But with the incident in Addu, some people are telling us the level of speech also changed. That the level of speech with reference to the Holy Prophet became lower,” he said.

However, Mohamed denies the allegation. He said he made no other changes expect for the dialect.