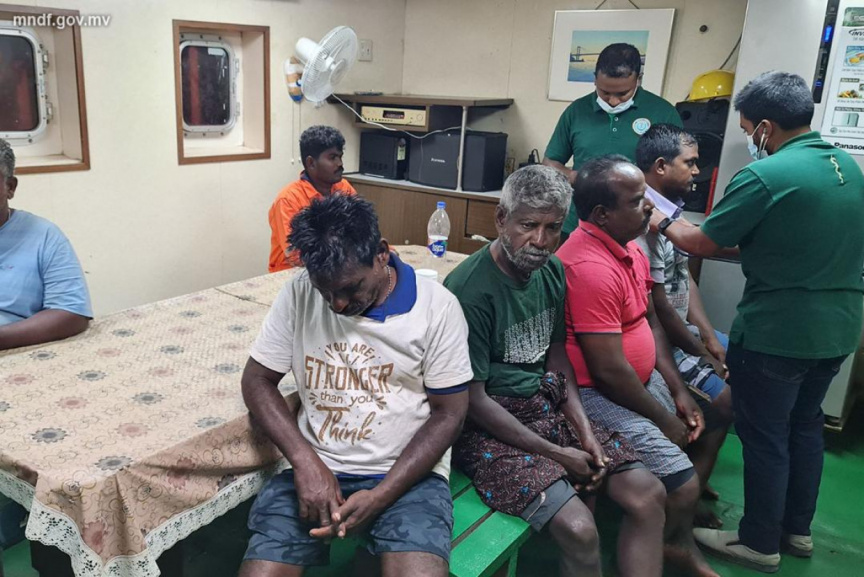 All the crew members of the capsized ship travelling from India’s Tuticorin to Male’, Maldives are doing well as per MNDF. (Photo / MNDF)

All of the people travelling on the capsized boat that was coming from India’s Tuticorin to Male’, Maldives were brought to Male’ on Saturday night.

According to Maldives National Defence Force (MNDF) that boat departed for Male’ on Wednesday, and got caught up in stormy weather. It sunk about 30 nautical miles outside of K. Kaashidhoo.

Six of the total seven crew members on the boat at the time were rescued from the sea by a nearby ship - ‘Mv Baradhuvaaj’, and were doing well when brought to Male’, said MNDF.

On Saturday, MNDF reported that one crew member was missing and that MNDF’s Coastguard second squadron launch Hakuraa was operating in the area searching for the missing person.

At 1725 on Saturday evening, the missing individual was found by Coastguard launch Hakuraa. The man was brought to Male’ and taken to IGMH.

MNDF stated that they were currently in contact with the relevant authorities and making all the necessary arrangements.

Armed soldiers to be active in Male’ area for training