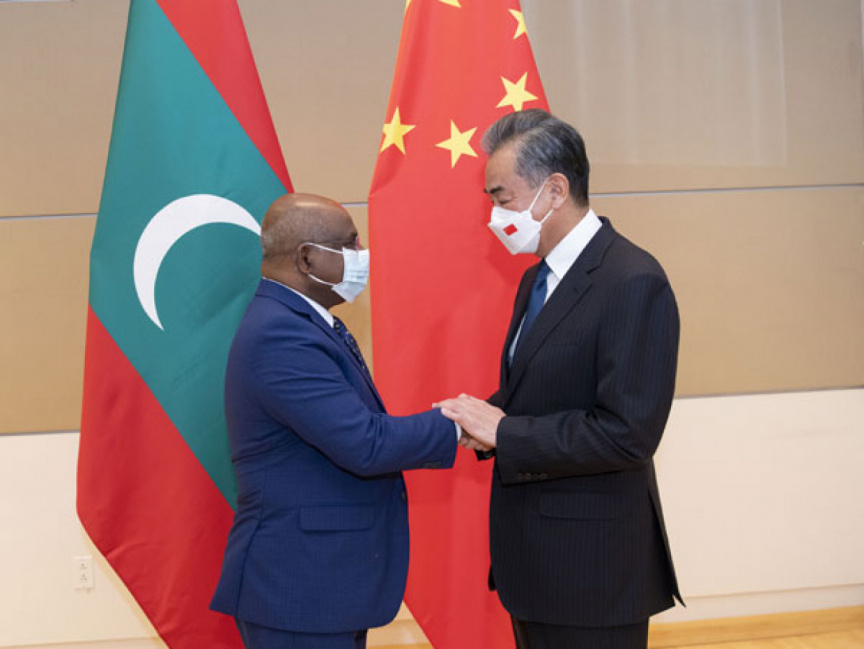 Wang and Shahid met on the sidelines of the United Nations General Assembly in New York on Saturday. During the meeting, Wang congratulated Shahid on the successful execution of duties during his presidency of the UN General Assembly, which Wang described made positive contributions to the development of the UN cause, addressed global challenges, and helped the Maldives to improve its international status and influence.

Noting this year marked the 50th anniversary of establishment of diplomatic relations between China and Maldives – both nations upheld the spirit of friendship and neighborliness, treating each other as equals, conducting cooperation for development, supporting each other with mutual assistance and tiding over difficulties together during the past half a centry.

Wang expressed gratitude to Maldives for their long-standing understanding and support for China's just claims on issues concerning China's core interests and major concerns. Particularly, he emphasized the Maldives’ adhere to the one-China policy.

Underscoring China and Maldives have a tradition of mutual understanding and support – Wang stressed that China also supports Maldives in safeguarding its sovereignty, independence and national dignity, and will continue to uphold justice for the Maldives in the international arena.

Shahid expressed gratitude to China for its long-standing valuable support to the Maldives in various fields such as infrastructure, education, and energy. On particulars, he stressed that China-Maldives Friendship Bridge built with China's assistance brought about significant changes to the Maldives, and greatly accelerated economic development process, also benefitting the Maldivian people.

He confirmed that the one-China principle is a firm consensus of the Maldivian government which the island nation will consistently and strongly adhere to. Underscoring that the one-China principle is also an international consensus confirmed by the UN General Assembly resolution – Shahid recalled releasing a press statement earlier in his capacity as the President of the UN General Assembly to make his position clear.

Shahid also thanked China for their support during his presidency at the UN General Assembly – adding he looks forward to continue to strengthen coordination with China on multilateral affairs.

Apart from this, during the meeting, Wang and Shahid, both, expressed readiness to continue to advance high-quality Belt and Road cooperation and speed up the ratification of the free trade agreement, so as to inject more stable and positive expectations for bilateral cooperation during their meeting.