Economic Minister : Hanimaadhoo Airport development will be seen by elections 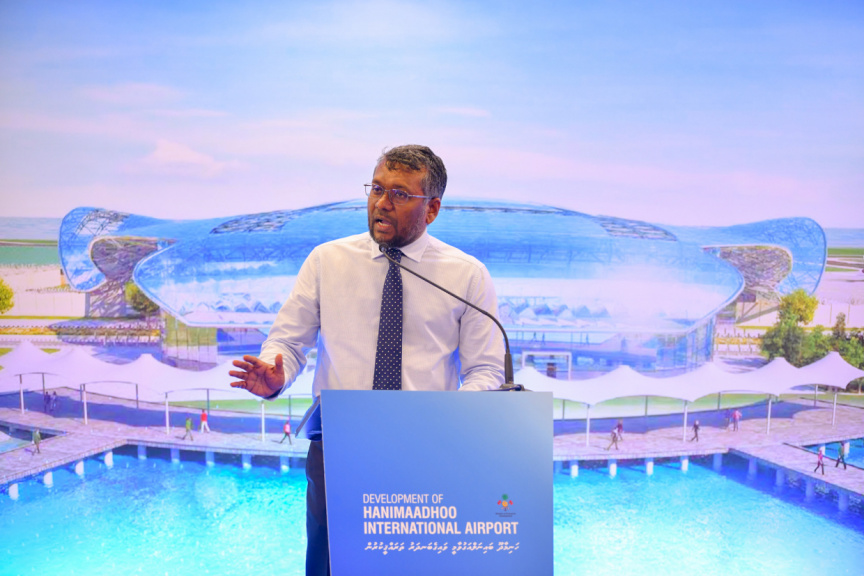 Minister of Economic Affairs Fayyaz Ismail on Sunday said that by next year’s Presidential Elections, the development of the Hanimaadhoo Airport will be seen.

Speaking at the ceremony held to sign the project agreement, the minister said that with changes in governments ongoing projects come to a halt sometimes, but assured that he would not let that happen to this one.

“We hope to take the project far enough for people to see the development before next year’s presidential elections.”

Responded to those criticizing the delays in commencing, he stated that attaining the finances and sorting out other details pertaining to such a project will take time.

“We have to cross many stages in order to reach here as well. That’s why it’s delayed.”

Additionally, the minister said that with this project, tourism, fishing, and other economic activities will be boosted.

Addressing the gathering, the High Commissioner of India to Maldives Shri Munu Mahawar said that this represents the close relations between Maldives and India.

The project valued at USD 136.6 million was awarded to India's JMC Projects Limited in August.

Financed by Line of Credit from India’s EXIM Bank, and executed between the Government of Maldives and the Bank in 2019 – which comprises a scope of a 2.46 kilometer new runway and a terminal with an annual capacity of 1.3 million passengers.

Other facilities required to expand international travel will also be developed under the project.

The Hanimaadhoo Airport development project is one of the most noteworthy ones by the Solih administration.

Economic Ministry predicted physical work on the project to commence by the end of 2022, be completely finished by 2024, and be opened for services.

Fayyaz respond to those against gov on Mauritius issue

Office with all postal services opening in phase II