Muizzu: Trust between PPM and CPC the foundation of Maldives-China ties 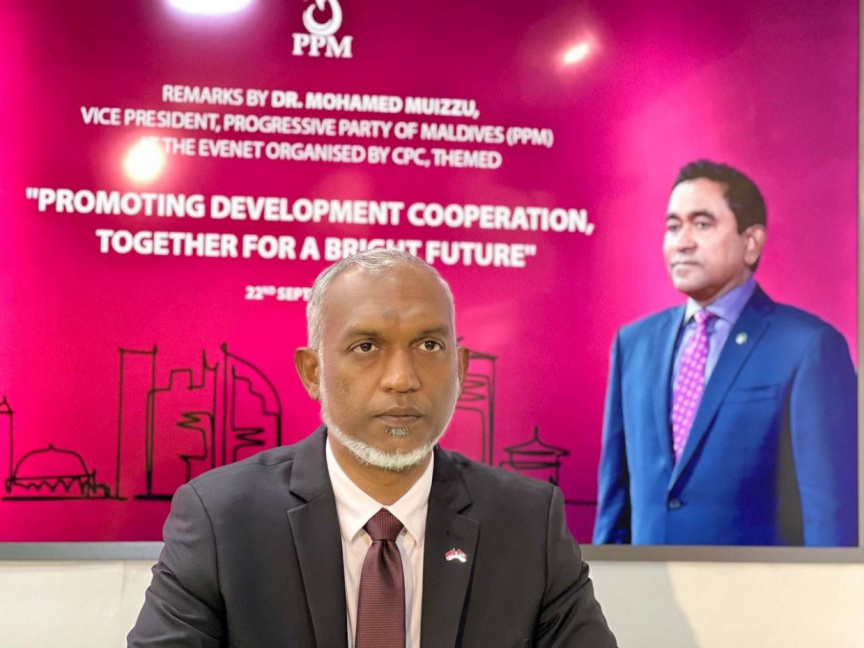 PPM deputy leader and Male’ City mayor Dr. Mohamed Muizzu delivers his remarks at a webinar held by the Communist Party of China on September 22, 2022. (Photo/PPM)

He made the remark during a webinar hosted by CPC themed ‘Promoting Development Cooperation, Together for a Brighter Future’ on Thursday.

“At the very base of China-Maldives ties has been the trust and collaboration between CPC and PPM. It is no coincidence that the peaking of our ties coincided with a term in office of PPM,” he said.

“The friendship and cooperation between President Xi and President Yameen ushered in a period of unprecedented development cooperation.”

He said that PPM looked forward to returning to power in 2023, and would reinforce ties with China.

“We look forward to returning to government in 2023, with President Yameen at the helm, to script a further chapter of strong ties between our two countries, both domestically and internationally,” he said.

Maldives and China are set to mark 50 years to official diplomatic relations on October 15.

Muizzu thanked China for its support to the development of Maldives over the years, and highlighted on milestones of Maldives-China relations such as being one of the first to join President Xi’s belt and road initiative, President Xi’s visit to Maldives in 2014 – the first time for a Chinese head of state to pay a state visit to Maldives, and the Sinamale’ Bridge (China-Maldives Friendship Bridge) – a bridge that connects Male’ City with Hulhumale’ and Hulhule’ - built with funding from China.

“The China-Maldives Friendship Bridge, which completed its fourth year and 100 millionth crossing in serving our people in recent weeks has become a lasting symbol of our special ties,” he said.

“And contributions that may be less visible but equally vital to our growth,” he said.

Muizzu said that China continues to support Maldives, and noted he recently received a donation of LED street lights from the Chinese embassy to light Male’ City.

He said that Chinese support is “based on mutual trust, mutual respect and mutual benefit.”