Bill to criminalize ‘India Out’ campaign sent to committee 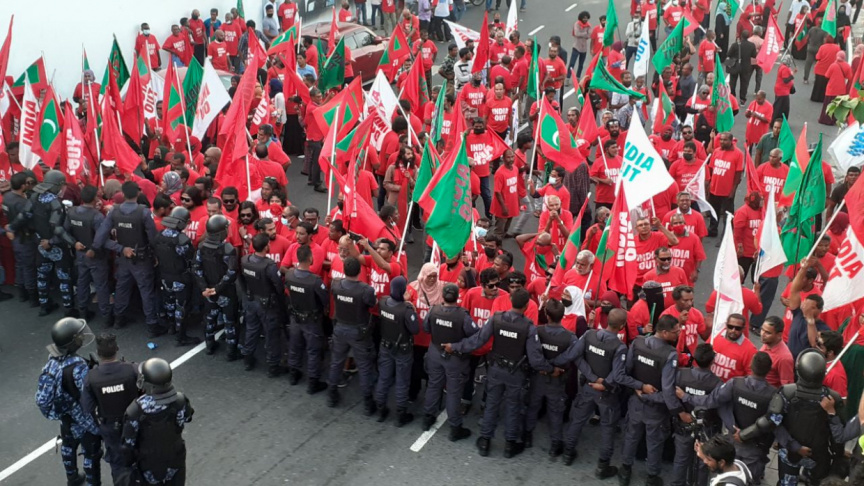 The amendment to the Penal Code to criminalize acts damaging to Maldives’ diplomatic interests, such as the ‘India Out’ campaign, has been accepted by the Parliament and sent to Judiciary Committee for review.

The bill was sent to the committee with the unanimous vote of 44 parliamentarians on Tuesday afternoon.

The bill was submitted to the Parliament on behalf of the government by Feydhoo MP Mohamed Nihad back in June.

According to the government, the purpose of the bill is to codify acts damaging to Maldives’ diplomatic interests as a separate crime under crimes related to public order, security and discipline standards on the Penal Code, and to make the necessary legislative changes to detail acts that will be considered such crimes.

The bill lists seven acts against a country or people from a country Maldives has official diplomatic ties with that will be treated as crimes. They are:

President Ibrahim Mohamed Solih issued a decree banning the ‘India Out’ campaign on April 21, deeming it a threat to national security.

PPM filed a lawsuit over the decree, calling the move an infringement on the right to freedom of expression.

Also Tuesday, the Parliament accepted the amendment to the Employment Act to postpone the implementation of minimum wage for expatriates indefinitely, and sent it to the Social Affairs Committee for review.

The bill was sent to the committee with a majority vote of 42 parliamentarians. Only one voted against the bill.

Maldives declared the minimum wage rates in November 2021, and began implementing it the beginning of this year.

The Employment Act currently allows two years before minimum wage must be given to expatriates, same as locals.

The new bill seeks to postpone the payment of minimum wage for expatriates indefinitely.

The Parliament also accepted a resolution by Thoddoo MP Hassan Shiyam which calls to remove differences in billing rates and bandwidths for state utility services for businesses in greater Male’ area and other islands.

The resolution was sent to the State-Owned Enterprises Committee for review with the unanimous vote of 45 parliamentarians.

Meanwhile, the resolution submitted by Nolhivaram MP Mohamed Nasheed Abdulla (Mosta) calling on the government to find a way to retain profits from tourism within the Maldivian economy was rejected with the unanimous consensus of 36 parliamentarians.