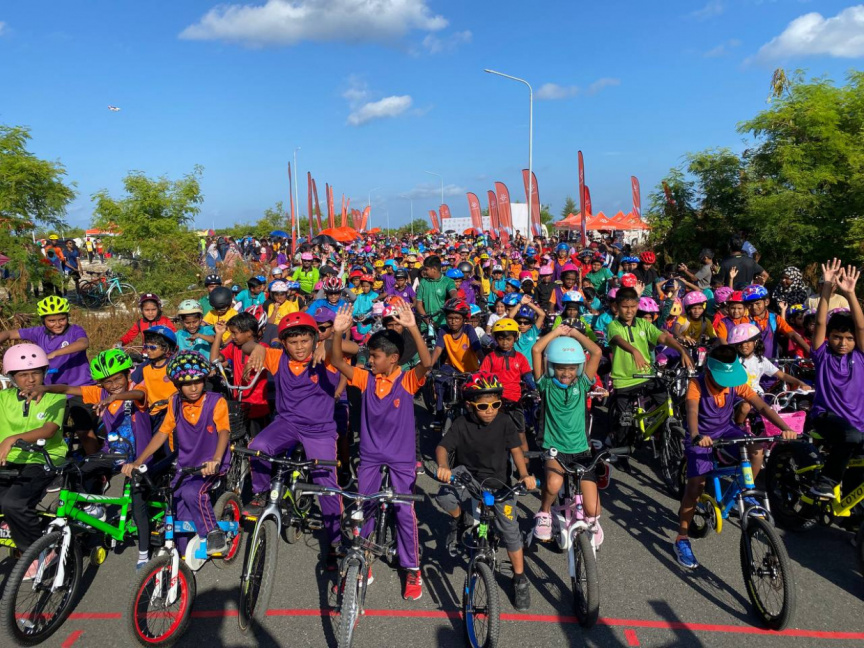 A capture from the third edition of ‘Mamen Interschool Cycling Championship’ by Dhiraagu and Bike Maldives. (Photo/Dhiraagu)

The third edition of ‘Mamen Interschool Cycling Championship’ by Dhiraagu and Bike Maldives concluded on Saturday; an event which was fully solar powered.

Held at the Cycling Track in Hulhumale’ Phase II on Friday and Saturday, the event saw the participation of more than 1,000 cyclists from over 32 schools.

Apart from this, 450 children participated in the ‘1K Fun Ride’ – who were all given medals upon completion of the ride. The medals were presented to participants by Sports Veteran Ibrahim Ismail, Brand Ambassador of Dhiraagu Hassan Saaid and other key officials from the telecom company and Bike Maldives.

This year’s ‘Mamen Interschool Cycling Championship’ was also notable for being the first 100 percent green energy event of the scale to be held in the Maldives. In this regard, the event was fully powered with solar energy, with electricity provided by portable power stations.

Dhiraagu and Bike Maldives organized the event along with supporting partners; HDC, Maldives Police Service, MTCC, Aerosalts. Chopart Maldives, ILAA Maldives and Girls Guide Association of the Maldives. First aid services in the event were provided by volunteers from Maldivian Red Crescent, Hulhumale’ Hospital and MNU School of Nursing. Meanwhile, the media partner for the event was Adhahdhu.

The telecom company states that they remain committed to o supporting and organising events that are both environment-friendly and contribute to the development of young children and youth in our community.