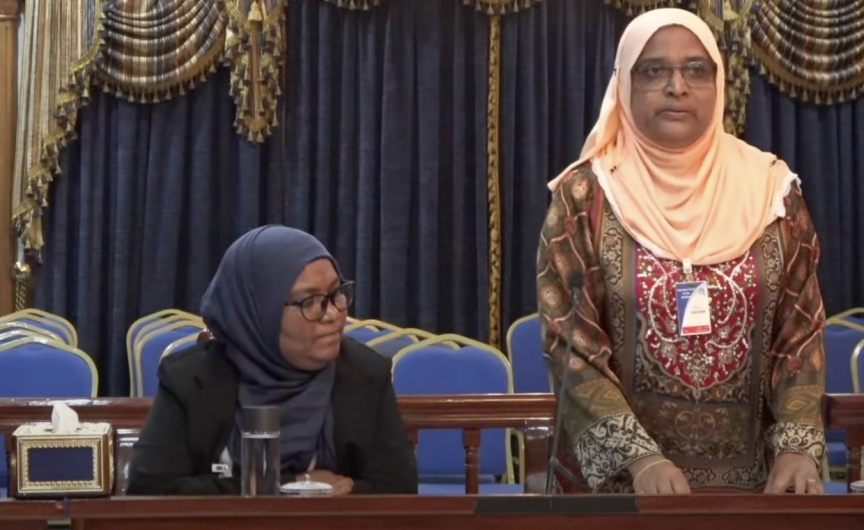 Criminal Court decided to proceed with hearings in the case against former Attorney General Azima Shakoor on Monday, after she failed to provide legal grounds for the case’s dismissal.

Azima, who served as Legal Affairs Minister at the President’s Office during former President Abdulla Yameen Abdul Gayoom’s administration, is charged with facilitating money laundering and providing false information to a state institution.

The charges against her stem from the allegation she acted in violation of the agreement with the Anti-Corruption Commission (ACC) to keep USD 1 million in suspected stolen funds deposited by SOF Pvt. Ltd to Yameen’s personal bank account at Maldives Islamic Bank in an escrow account, and of providing false information to ACC in its investigation against Yameen for money laundering.

The charges against her were filed on February 17, 2019. However, since then, the conviction against Yameen over the case – involving the sale of GA. Vodamula for tourism development - was overturned by the Supreme Court.

Azima subsequently lodged cases with both the High Court and Supreme Court, asking the courts to establish the charges against her must be dropped. However, the court’s decided Azima’s petition lacked any legal merit.

She then asked the Criminal Court to review the decision that her case can be heard based on civil standard of proof.

At the hearing on Monday, Judge Ali Adam said Azima failed to provide any legal grounds why the case against her cannot be heard.

He said the case wound therefore proceed as previously decided, and asked both the prosecution and the defense to submit pretrial motions.

He said an additional hearing would be held to hear pretrial motions.

Hearing in case against Azima scheduled for Tuesday

Former AG denies allegations against her in safari rape