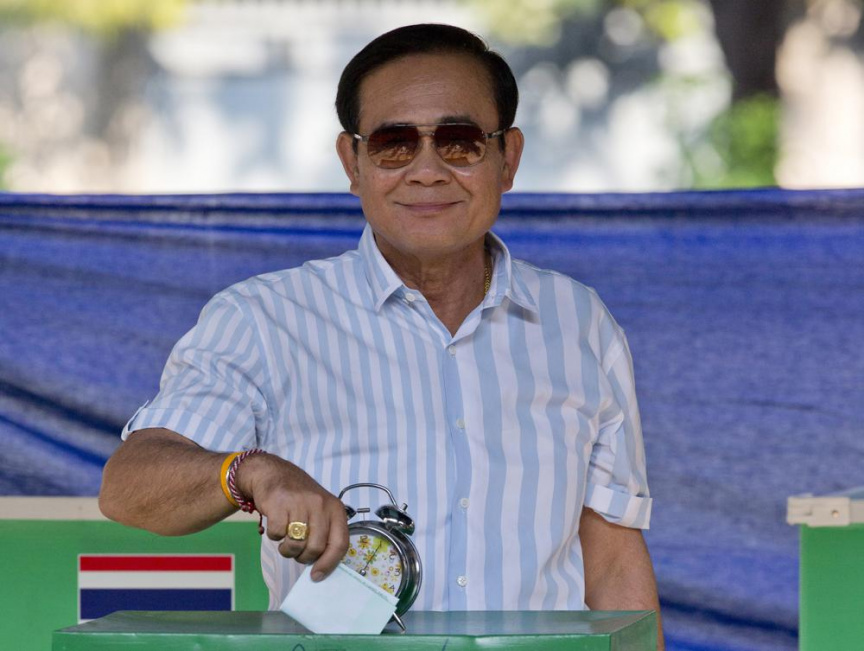 BANGKOK (AP) — Thailand’s government convened its first Cabinet meeting Thursday without its prime minister, who was suspended from his duties while the Constitutional Court decides whether the man who led a military coup in 2014 has violated the country’s term limits, potentially opening a new chapter of turmoil in the nation’s troubled politics.

Prime Minister Prayuth Chan-ocha’s removal is likely to only be temporary since the court has generally ruled in the government’s favor in a slew of political cases. Tipanan Sirichana, deputy spokesperson from the Prime Minister’s Office, said that the court decision meant he was suspended until a financial decision.

Deputy Prime Minister Prawit Wongsuwan has assumed the role of acting prime minister, he added, and presided over the Cabinet meeting.

Any decision to allow the general to stay on risks invigorating a protest movement that has long sought to oust him and reopening deep fissures in Thailand, which has been rocked by repeated bursts of political chaos since a coup toppled then-Prime Minister Thaksin Shinawatra in 2006.

Since then, Thaksin, a telecoms billionaire whose populist appeal threatened the traditional power structure, has remained at the center of the country’s politics, as his supporters and opponents fought for power both at the ballot box and in the streets, sometimes violently. The 2014 takeover ousted his sister from power.

Spokesperson Anucha Burapachaisri said Prayuth would respect the court’s decision and called on others to do the same. But those who want Prayuth gone don’t want Prawit, a close political ally of Prayuth and part of the same military clique that staged the coup, in power either.

“No Prayuth. No Prawit. No military coup government,” a leading protest group said in a statement after the Wednesday court decision.

The group known as Ratsadon, or The People, issued a new call for protests, but only a small number came in response.

Prayuth’s detractors contend he has violated a law that limits prime ministers to eight years in power — a threshold they say he hit Tuesday since he officially became prime minister on Aug. 24, 2014.

But his supporters contend his term should be counted from when the current constitution, which contains the term-limit provision, came into effect in 2017. Another interpretation would start the clock in 2019, when he won the job legally after a general election.

The case — in which the court is deciding whether a coup leader has stayed in power too long — highlighted Thailand’s particular political culture: Often the soldiers who overthrow elected leaders then try to legitimize their rule and defuse opposition by holding elections and abiding by constitutional restrictions.

By a vote of 5 to 4 on Wednesday, the court agreed to suspend the prime minister from his duties while it considers a petition from opposition lawmakers. The court’s announcement said Prayuth must submit his defense within 15 days of receiving a copy of the complaint, but it did not say when it would rule.

He will remain in his other post of defense minister, according to Anucha, the spokesperson.

Polls show Prayuth’s popularity is at a low ebb, with voters blaming him for mishandling the economy and botching Thailand’s response to the COVID-19 pandemic.

In 2020, tens of thousands of people took to the streets to demand that Prayuth and his Cabinet resign, while also calling for the constitution to be amended and the monarchy to be reformed.

Small protests appealing again to Prayuth to step down — and the Constitutional Court to force him to if he didn’t — have been held daily since Sunday, but drew only small crowds.

“I am very pleased. Gen. Prayuth has stayed for a long time and had no vision to develop the country at all,” Wuttichai Tayati, a 28-year-old who works in marketing, said while protesting Wednesday in Bangkok. “At least taking him out for now might make Thailand move forward a bit.”

Even if Prayuth does go, replacing him with Prawit will not resolve the standoff.

In addition to his close association with the military clique that seized power, Prawit, 77, was tainted by allegations he had illegally amassed a collection of luxury watche s he couldn’t possibly afford on a government salary, though a court accepted his explanation they were gifts and cleared him of wrongdoing.

Whether Prawit would or could take the prime minister’s post if the court rules against Prayuth is not clear. He has publicly acknowledged his health is not good and is better known as a behind-the-scenes political organizer.

Some legal scholars think the eventual replacement would have to come from the small pool of candidates that the country’s political parties nominated for the job after the 2019 general election. That list did not include Prawit, though it appears possible he could be nominated in case of a deadlock.

If he is not forced out of office, Prayuth must call a new election by March, though he has the option of calling one before that.

Thailand’s traditional conservative ruling class, including the military, felt that Thaksin’s popularity posed a threat to the country’s monarchy as well as their own influence. The courts have been stalwart defenders of the established order and ruled consistently against Thaksin and other challengers.

Fire at music pub in eastern Thailand kills at least 13