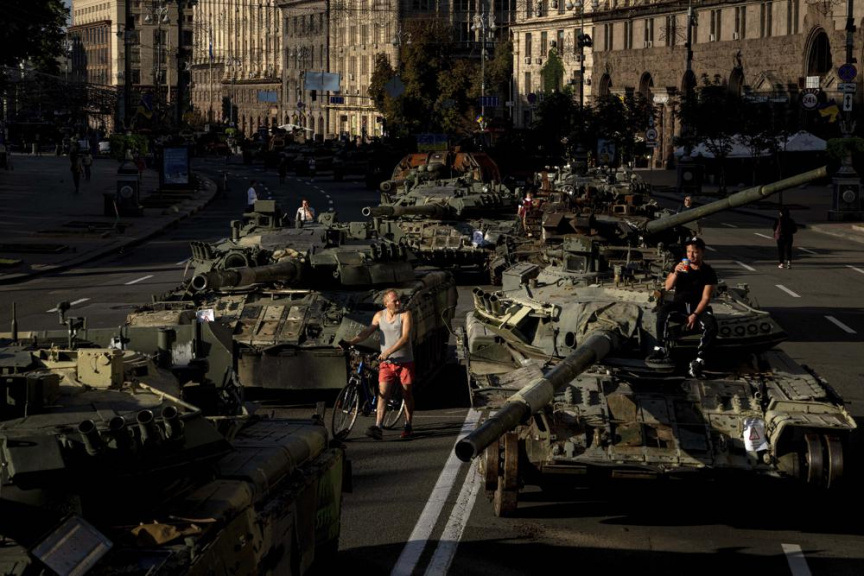 The lethal attack took place in Chaplyne, a town of about 3,500 people in the central Dnipropetrovsk region, Ukrainian news agencies quoted Zelenskyy as telling the U.N. Security Council via video. The president’s office also reported that an 11-year-old child was killed by rocket fire earlier in the day in the settlement.

“Chaplyne is our pain today,” Zelenskyy said in his nightly video address to the nation.

At one point, Zelenskyy put the number of wounded at about 50. The deputy head of Zelenskyy’s office later said 22 people were wounded in the attack, which hit five passenger rail cars.

Ukraine had been bracing for especially heavy attacks around the national holiday that commemorates Ukraine’s declaration of independence from the Soviet Union in 1991. Wednesday also marked the six-month point in the war.

Days ahead of Independence Day, Kyiv authorities banned large gatherings in the capital through Thursday for fear of missile strikes.

Residents of Kyiv, which has been largely spared in recent months, woke up Wednesday to air raid sirens, but no immediate strikes followed. As the day wore on, Russian bombardments were reported in the country’s east, west and center, with the most serious attack apparently at the train station.

Outgoing British Prime Minister Boris Johnson marked the holiday with a visit to Kyiv — his third since the war broke out — and other European leaders used the occasion to pledge unwavering support for Ukraine, locked in a battle that was widely expected to be a lightning conquest by Moscow but has turned into a grinding war of attrition. U.S. President Joe Biden announced a new military aid package of nearly $3 billion to help Ukrainian forces fight for years to come.

Nevertheless, a festive atmosphere prevailed during the day at Kyiv’s Maidan square as thousands of residents posed for pictures next to burned-out Russian tanks put on display. Folk singers set up, and many revelers — ignoring the sirens — were out and about in traditionally embroidered dresses and shirts.

“I can’t sleep at night because of what I see and hear about what is being done in Ukraine,” said a retiree who gave only her first name, Tetyana, her voice shaking with emotion. “This is not a war. It is the destruction of the Ukrainian people.”

In a holiday message to the country, Zelenskyy exulted over Ukraine’s success in fending off Moscow’s forces since the invasion, saying: “On Feb. 24, we were told: You have no chance. On Aug. 24, we say: Happy Independence Day, Ukraine!”

Britain’s Johnson urged Western allies to stand by Ukraine through the winter.

“This is not the time to put forward flimsy negotiating proposals,” he said. “You can’t negotiate with a bear when it’s eating your leg or with a street robber when he has you pinned to the floor.”

A car bombing outside Moscow that killed the 29-year-old daughter of right-wing Russian political theorist Alexander Dugin on Saturday also heightened fears that Russia might intensify attacks on Ukraine this week. Russian officials have blamed Ukraine for the death of Darya Dugina, a pro-Kremlin TV commentator. Ukraine has denied any involvement.

Russian President Vladimir Putin’s forces have encountered unexpectedly stiff Ukrainian resistance in their invasion and abandoned their effort to storm the capital in the spring. The fighting has turned into a slog that has reduced neighborhoods to rubble and sent shock waves through the world economy.

Russian Defense Minister Sergei Shoigu, speaking Wednesday at a meeting of his counterparts from a security organization dominated by Russia and China, claimed the slow pace of Moscow’s military action was due to what he said was an effort to spare civilians.

Russian forces have repeatedly targeted civilian areas in cities, including hospitals and a Mariupol theater where hundreds of people were taking shelter.

But Shoigu said Russia is carrying out strikes with precision weapons against Ukrainian military targets, and “everything is done to avoid civilian casualties.”

“Undoubtedly, it slows down the pace of the offensive, but we do it deliberately,” he said.

On the battlefield, Russian forces struck several towns and villages in Donetsk province in the east over 24 hours, killing one person, authorities said. A building materials superstore in the city of Donetsk was hit by a shell and erupted in flames, the mayor said. There were no immediate reports of any injuries.

In the Dnipropetrovsk region, the Russians again shelled the cities of Nikopol and Marhanets, damaging several buildings and wounding people, authorities said. Russian troops also shelled the city of Zaporizhzhia, but no casualties were reported.

In addition, Russian rockets struck unspecified targets in the Khmelnytskyi region, about 300 kilometers (180 miles) west of Kyiv, the regional governor said. Attacks there have been infrequent.

Donors pledge millions to get Ukraine through winter