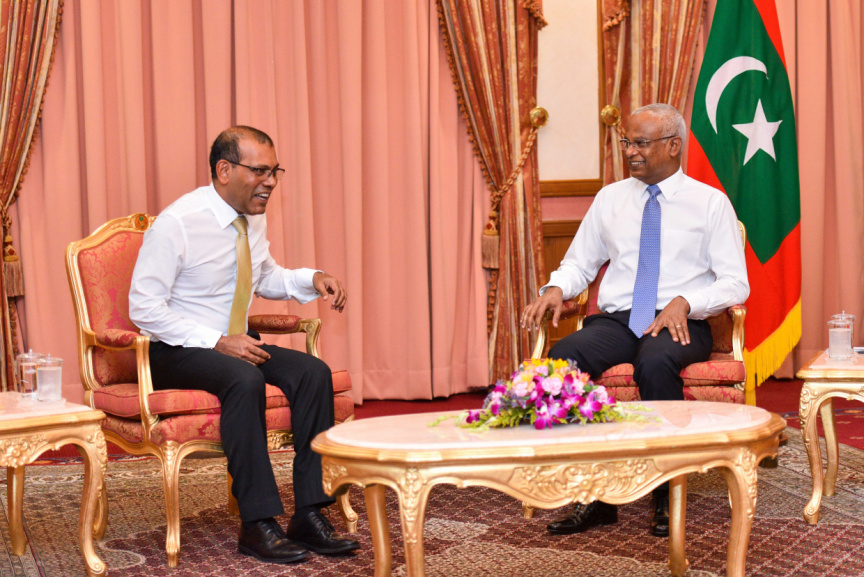 President Ibrahim Mohamed Solih on Tuesday requested to take back the resolution on holding a constitutional referendum to shift to a Parliamentary system that Speaker of the Parliament and former President Mohamed Nasheed has submitted submit to the Maldivian Democratic Party’s (MDP) Congress.

Nasheed submitted that resolution on Thursday, August 11. It called to hold a constitutional referendum to switch the governing system – and make major changes to the constitution should the people choose a parliamentary system.

In an interview given by President Solih to local channel RaajjeTv, he stated that looking at the current situation of the country, this was not the best time to take such a vote and change governing systems. He also urged to take back the resolution.

Noting that his personal opinion was to keep the current Presidential system as it is. He also expressed his belief that having President that was elected 100 percent by the people was the best way.

Furthermore, he declared his support for a system that allows separation of powers, as this would mean people elected representatives were creating the laws while another body independently enforces those.

“I believe that this resolution is way too “young” right now to be submitted to congress, holding debates on and taking a vote for it. I urge to take back the resolution. Take it back and for those who support this take it to the people. Go to houses even. Talk on platforms. Debate on holhuashi (benches by the beach).”

President Solih does not believe that the resolution will pass from congress as it is at the moment.

MDP’s congress is scheduled to be held on Friday, August 19.

In addition to President Soih, leaders of the Maldivian political arena have been expressing their disagreement with making a shift in governing systems.

Meanwhile, Nasheed, who remains steadfast in his quest has said that a Parliamentary system was the only way MDP can rule.

Speaking at a gathering held to garner support for his visionary, Nasheed said that there would not be anyone in congress who would disagree that the Parliamentary system is the route for MDP to rule.

“The main reasoning behind me wanting to change systems is to ensure our party (MDP) that has been governing responsibly remains in power.”

During a press conference held on Monday, August 15, he explained the timeline for his vision of changing the system of government in the Maldives.

“To have the 2023 presidential elections held by an amended Constitution, and to have a full-functioning parliamentary system with the 2024 parliamentary elections,” he said.