Shiaau’s murder: Body yet to be sent for autopsy, arrangements being made 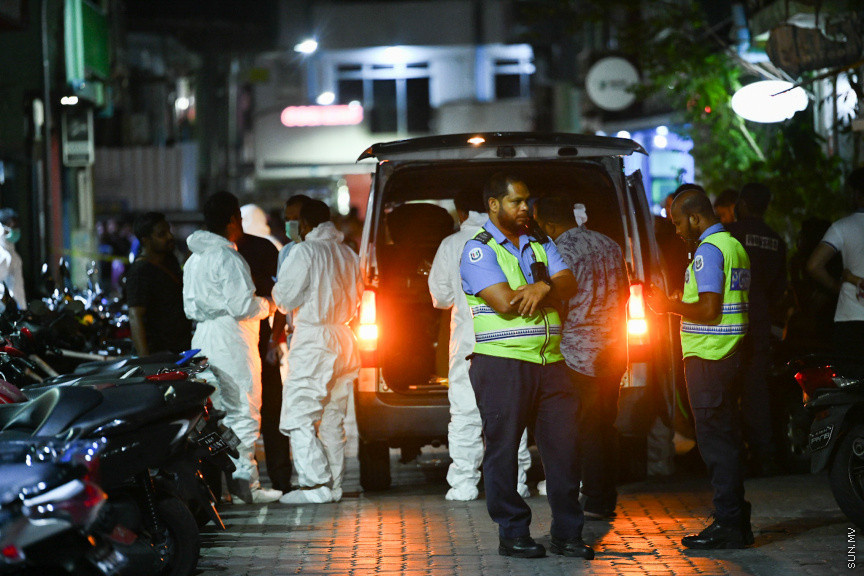 Police at the scene of a brutal murder of a woman at a home in Male' City on August 7, 2022. (Sun Photo/Mohamed Hayyan)

Maldives Police Service, on Thursday, has stated that the body of Shiaau Mohamed Saeed, Kuri, Fuvahmulah City, who was brutally murdered on last Saturday night is yet to be sent abroad for postmortem examinations.

Police said that the crime was reported to authorities at approximately 23:18pm on Saturday night.

A suspect was arrested at a scene - renowned local skater, Ali Shaahil, 22, Finfenmaage, F. Nilandhoo. He was escorted in a hazmat suit to a police vehicle at 1:25am on Sunday morning.

At a press conference held on Sunday evening, the Police announced the decision to send Shiaau’s body abroad for postmortem examinations.

When Sun inquired an update regarding the matter, a Police Spokesperson told Thursday that information will be relayed to the media once the preparations are complete and the body is sent off.

The suspect arrested; Shaahil has been remanded in police custody pending the outcome of his trial.

He was first taken to Galolhu Police Station after his arrest on early Sunday morning. He was later transported to Dhoonidhoo.

The victim, Shiaau’s  body was transported to Gololhu Mortuary in an ambulance belonging to Indira Gandhi Memorial Hospital (IGMH) on Sunday morning from the crime scene. Sun journalists who were at the scene reported that her body was loaded onto the ambulance in two separate body bags.

At a press conference held on Sunday evening, Police said that Shaahil was under influence at the time of his arrest.

They also confirmed having seized the weapon used to commit the murder from the crime scene.

Shiaau’s murder is considered one the most gruesome in recent history of the island nation. This is as dismembering the body following a murder is extremely uncommon in the Maldives.