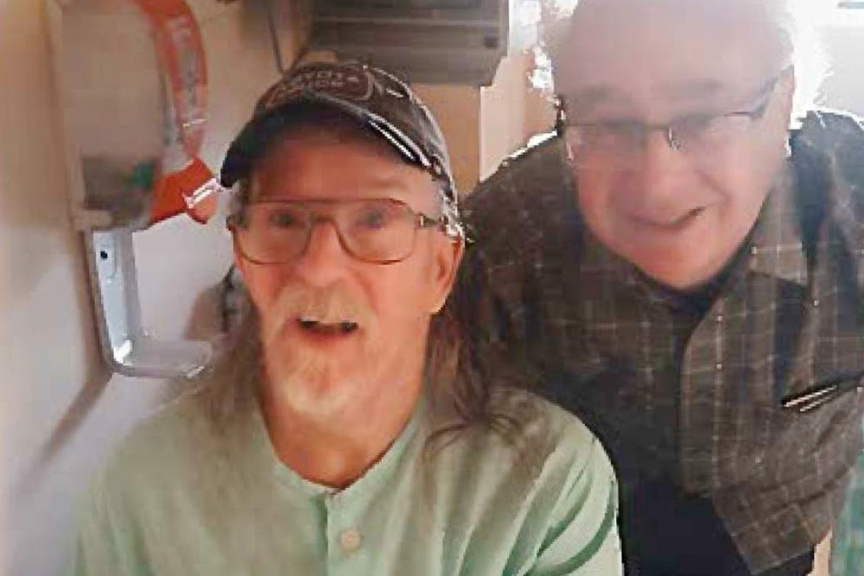 This photo provided by Gary Nichols shows him, right, with his brother, Alan, on the eve of his euthanization in Chilliwack, British Columbia, Canada, in July 2019. (Courtesy Gary Nichols via AP)

TORONTO (AP) — Alan Nichols had a history of depression and other medical issues, but none were life-threatening. When the 61-year-old Canadian was hospitalized in June 2019 over fears he might be suicidal, he asked his brother to “bust him out” as soon as possible.

Within a month, Nichols submitted a request to be euthanized and he was killed, despite concerns raised by his family and a nurse practitioner.

His application for euthanasia listed only one health condition as the reason for his request to die: hearing loss.

Nichols’ family reported the case to police and health authorities, arguing that he lacked the capacity to understand the process and was not suffering unbearably — among the requirements for euthanasia. They say he was not taking needed medication, wasn’t using the cochlear implant that helped him hear, and that hospital staffers improperly helped him request euthanasia.

Disability experts say the story is not unique in Canada, which arguably has the world’s most permissive euthanasia rules — allowing people with serious disabilities to choose to be killed in the absence of any other medical issue.

Many Canadians support euthanasia and the advocacy group Dying With Dignity says the procedure is “driven by compassion, an end to suffering and discrimination and desire for personal autonomy.” But human rights advocates say the country’s regulations lack necessary safeguards, devalue the lives of disabled people and are prompting doctors and health workers to suggest the procedure to those who might not otherwise consider it.

Equally troubling, advocates say, are instances in which people have sought to be killed because they weren’t getting adequate government support to live.

Canada is set to expand euthanasia access next year, but these advocates say the system warrants further scrutiny now.

Euthanasia “cannot be a default for Canada’s failure to fulfill its human rights obligations,” said Marie-Claude Landry, the head of its Human Rights Commission.

Landry said she shares the “grave concern” voiced last year by three U.N. human rights experts, who wrote that Canada’s euthanasia law appeared to violate the agency’s Universal Declaration of Human Rights. They said the law had a “discriminatory impact” on disabled people and was inconsistent with Canada’s obligations to uphold international human rights standards.

Tim Stainton, director of the Canadian Institute for Inclusion and Citizenship at the University of British Columbia, described Canada’s law as “probably the biggest existential threat to disabled people since the Nazis’ program in Germany in the 1930s.”

During his recent trip to Canada, Pope Francis blasted what he has labeled the culture of waste that considers elderly and disabled people disposable. “We need to learn how to listen to the pain” of the poor and most marginalized, Francis said, lamenting the “patients who, in place of affection, are administered death.”

Canada prides itself on being liberal and accepting, said David Jones, director of the Anscombe Bioethics Centre in Britain, “but what’s happening with euthanasia suggests there may be a darker side.”