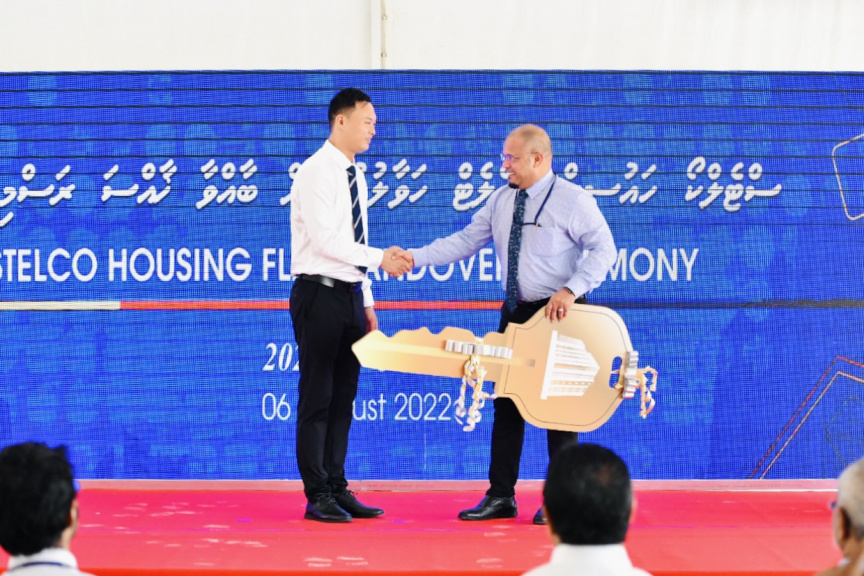 From the ceremony held to handover flats build by the company to employees. (Sun Photo / Hussain Naail)

State Electrical Company Limited (STELCO) has finally handed over the long-awaited flats built in the second phase of Hulhumale’,

The employees were officially handed over the flats during a special ceremony held near the flat towers on Saturday morning.

The flat keys were handed over by the contractor to Managing Director Ahmed Shareef, who then handed them to STELCO’s Housing Project Coordinating Committee.

Speaking at the ceremony, Shareef said that the Housing Project Coordinating Committee has been assigned the task of naming the flats.

“[I] came here after deliberating on this in different ways. Even after trying so much, we could not get a Dhivehi name that represented STELCO. So we looked into English names. After much consideration, we decided to name the STELCO towers “Blue Rich”. Blue to represent STELCO and Rich is the name of the towers.”

He also revealed that a total of MVR 692 million was spent on the project. However, he added that after much negotiations, it was decided that only MVR 623 million will be taken from employees.

He noted that the remaining amount will be paid by the company.

Furthermore, Shareef revealed that 20 percent from the 623 million – which is MVR 114 million has now been collected.

It was also highlighted that from the 360 employees that received flats, 203 will be provided loans from the company.

STELCO’s staff will not be charged rent on the flats until December.