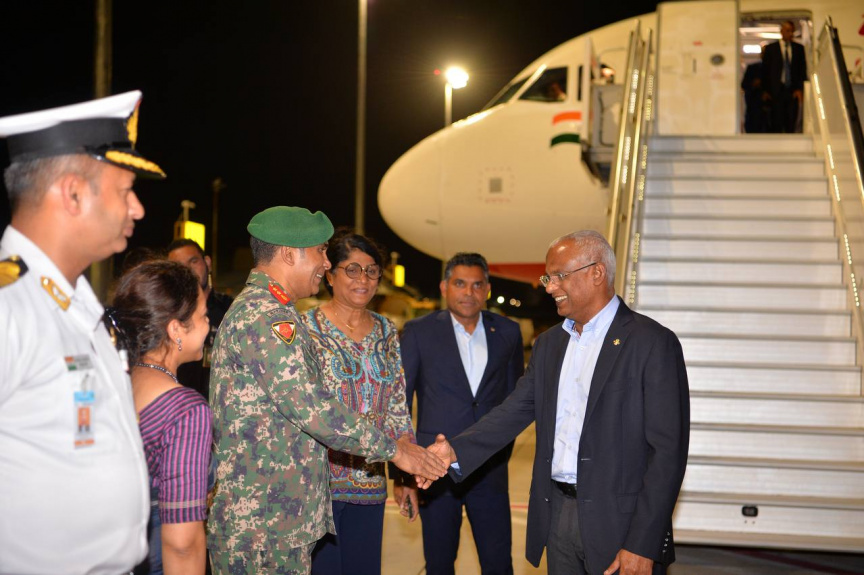 President Ibrahim Mohamed Solih returned to Maldives on Thursday, after concluding his official visit to India at the invitation of the Prime Minister of India Narendra Modi.

During this four-day visit, President Solih travelled to New Delhi and Mumbai.

In the first part of the trip, he visited New Delhi, where he held official discussions with the Indian Prime Minister at Hyderabad House. Both the leaders reviewed the status of past and present cooperation and discussed future collaboration and ways to strengthen existing ties.

Additionally, the diplomats presided over the exchange of six key agreements ranging from capacity building and training to financing pivotal development projects in the Maldives, between the two nations. They also virtually initiated the "Pouring of First Concrete" of the Greater Malé Connectivity Project (GMCP) during this meeting.

After launching the project, the two leaders delivered a joint press statement where they reaffirmed their commitment to the region's shared vision of peace and development.

The President later joined the Prime Minister at the Hyderabad House for an official luncheon hosted in his honour.

During his time in Dehli, President Solih paid a courtesy call on the President of India, Droupadi Murmu at Rashtrapati Bhavan in New Delhi, India.

He congratulated President Murmu on her inauguration and expressed hope that bilateral relations between the Maldives and India would strengthen during her tenure.

He later visited the Bombay Stock Exchange (BSE) and held discussions with the board members and other management staff there. The BSE expressed interest in exploring opportunities to collaborate on the development of the Maldives' stock markets.

He concluded the by touring the Jawaharlal Nehru Port Trust (JNPT), India's second-largest container handling port, where he was given a guided tour and the Chairman of the facility, Sanjay Sethi briefed the President and his delegation on the history and operations of the JNPT.

President's Office noted that President Solih’s visit to India signifies the close bilateral relations between the two countries, adding that India has been a vital partner in the socioeconomic development of the Maldives. The administration is currently developing a number of crucial infrastructure and community empowerment projects with Indian assistance.

A high-level delegation of government officials and business leaders from the Maldives accompanied the President on this visit.