Dunya Maumoon: Yameen’s administration was a climate of fear for Maldives 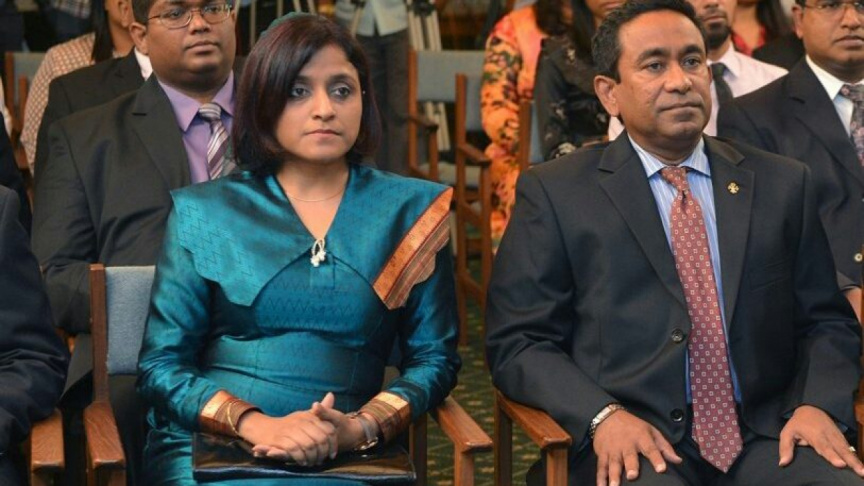 In a video message posted on Twitter, Dunya who was Foreign Minister during Yameen’s reign said that she believes the leader of the past two governments failed in front of the people of Maldives.

She added stated that they have lost the trust of the people.

Quoting her party leader Colonel (Rdt) Mohamed Nazim, she stated that he had specifically noted Yameen’s administration or Yameen himself has been a traitor to the country.

“His administration saw the biggest frauds in the country, a lot of corruption, and many many more issues, including jailing all the leaders of the opposition. It was definitely a climate of fear in the country. It is something that Maldivians remember well.

She also said that we have to be very concerned that such things are not repeated in the future.

Nazim posted the video on Twitter agreeing with her remarks.

Responding to his tweet, Dunya went on to add that they all saw his [Yameen’s] wrath.

“We saw his wrath! So many families did! Both you, your family and mine! Painful times..”

This comes not too long after Yameen said that Jumhoory Party’s (JP) Leader Qasim Ibrahim and MNP Leader Nazim will remain traitors until their death.

“Nazim, Qasim: Your meek effort to distance yourself from the abyss you have thrown the country into, going to redeem yourselves? Traitors until death do you apart,” he had said.

Nazim swiftly responded to this stating Yameen to be the biggest traitor that Maldives ever saw. He also questioned why the former president was still advocating himself as a national hero that loves the country after committing crimes such as theft and corruption.

Meanwhile, PPM’s senate has already named Yameen to be their candidate in the upcoming Presidential Elections. The party is gearing up to host a special ceremony to officially hand over the ticket to him.

An official from PPM told Sun on Wednesday that that ceremony is a mass event being held on August 19, in honour of Yameen. In this regard, the official said that the agenda of the ceremony includes the handover of the presidential ticket to Yameen and congratulating him.

'News of birds being put down triggered shock'

Dunya: I wasn't involved in discussion on UTF agreement

Dunya: Appointment of female justices is not debatable