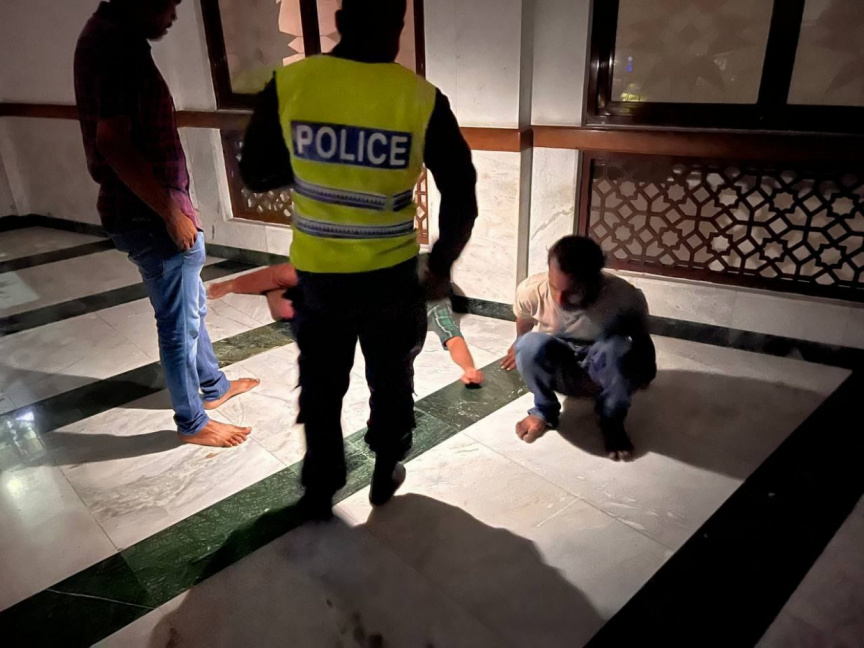 Two thieves who tried to steal from Jalaaluddin Mosque that were caught and handed over to police. (Photo/Male' City Council)

Two individuals who tried to steal from Jalaaluddin Mosque have been caught and handed over to the police.

Male’ City Mayor Dr. Mohamed Muizzu said that the theft attempt was brought to the attention of Male’ City Council through the CCTV cameras installed at the premise for security purposes.

“With assistance of the CCTV system established by City Council to oversee the security of Male’ mosques – two individuals who tried to steal from Jalaaluddin Mosque last night were stopped and handed over to the police,” Mayor Muizzu had said.

Maldives Police Service did not confirm whether the two individuals remain in custody or not.

Male’ City Council installed CCTV cameras at mosques under their oversight for 24-hour surveillance when the mosques became a hub for drug addicts to abuse narcotics during lockdowns enforced in light of the COVID-19 pandemic.

The council installed CCTV camera at 29 mosques in Male’ and Vilimale’ under their project to established 24-hour surveillance in public spaces in the city.

MIRA's MVR 25 thief broke into other buildings before

'Do not believe Islamic unity is being upheld'