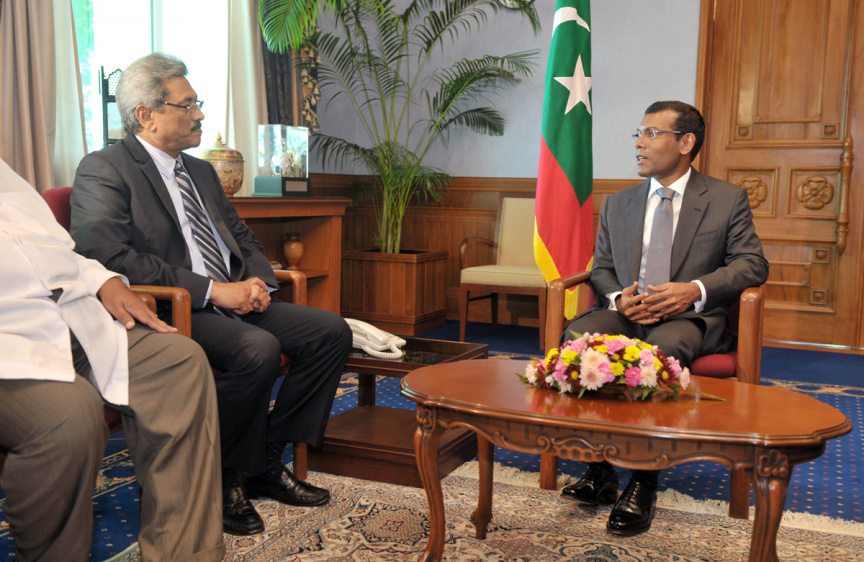 Twelve hours after his departed from the island nation, Maldivian government, on Thursday night, issued the first official statement on Gotabaya Rajapaksa’s transit in Maldives after fleeing his country, Sri Lanka.

A statement released by Foreign Ministry last night read that the Maldivian government, at the official request of Sri Lankan government, granted diplomatic clearance for a Sri Lanka Air Force aircraft carrying Rajapaksa and his spouse on a transit visit, to land at the Velana International Airport on Wednesday.

The ministry also confirmed of Rajapaksa’s departure to Singapore on Thursday.

Rajapksa tendered his resignation as the president of Sri Lanka on Thursday night, whilst based at Singapore.

Following foiled attempts to depart to Dubai and Abu Dhabi in the United Arab Emirates - Rajapaksa fled Sri Lanka in the early hours of Wednesday, arriving in the neighboring Maldives, mere hours before he was due to step down from his post over the civilian uprising prompted by the island nation’s devastating economic crisis.

Sri Lankan presidents are protected from arrest while in power, and it is likely Rajapaksa planned his escape while he still had constitutional immunity.

Rajapaksa left Maldives at 11:30am on Thursday morning via a flight of Saudi Arabian Airlines bound for Singapore, as reported by Associated Press citing a Maldivian government official who spoke to the media outlet on the condition of anonymity.

Sun has learned that Rajapaksa was based at Waldorf Ithaafishu Resort’s private island during his short transit in the Maldives. He was initially supposed to be hosted at K. Girifushi, a local military base.

“I hope Sri Lanka can now move forward. I believe the President would not have resigned if he were still in Sri Lanka, and fearful of losing his life,” he had said.

Witnesses place Nasheed at Velana International Airport when the military aircraft carrying Rajapaksa landed in the early hours of Wednesday.

'Issue isn't the dialect, but violation of regulations'