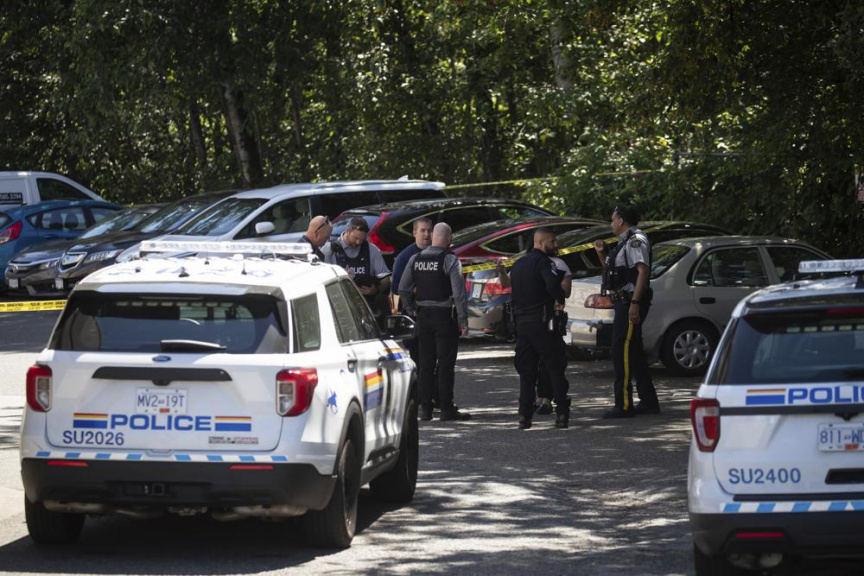 RCMP and Surrey Police officers work at the scene of a shooting near a red Tesla vehicle, back, in Surrey, British Columbia, Canada, on Thursday, July 14, 2022. (Darryl Dyck/The Canadian Press via AP)

SURREY, British Columbia (AP) — A man acquitted in a terrorist bombing that killed 329 people aboard an Air India flight in 1985 was slain Thursday in a possible targeted shooting, Canadian authorities said.

Officials said the victim was Ripudaman Singh Malik, who with co-defendant Ajaib Singh Bagri was found not guilty in March 2005 of murder and conspiracy in a pair of Air India bombings that killed 331 people on June 23, 1985.

Police had not initially released the dead man’s identity, but confirmed it after Malik’s son, Jaspreet Malik, reported his father’s slaying in a statement on social media.

“The media will always refer to him as someone charged with the Air India bombing,” the son wrote on Facebook. “The media and RCMP never seemed to accept the court’s decision and I pray today’s tragedy is not related.”

A witness who works a car wash in Surrey said he heard shots Thursday morning and ran outside to find Malik unconscious in his car.

In a statement, the Integrated Homicide Investigation Team said: “We are aware of Mr. Malik’s background, though at this time we are still working to determine the motive. We can confirm that the shooting appears to be targeted and there is not believed to be any further risk to the public.”

Sgt. Timothy Pierotti said that because the shooting took place in a residential area, police were confident witnesses would be able to help solve the crime.

Police said shortly after the attack that a vehicle believed to be used in the shooting was found engulfed in fire a few blocks away.

In Malik’s trial, British Columbia Supreme Court heard that a suitcase bomb was loaded onto a plane at Vancouver’s airport and then transferred in Toronto to Air India Flight 182. The aircraft crashed into the Atlantic Ocean off the coast of Ireland, killing 329 passengers and crew.

About an hour later, a bomb destined for another Air India plane exploded prematurely at Tokyo’s Narita Airport, where two baggage handlers died.

Inderjit Singh Reyat, the only man convicted in the bombings, testified for the prosecution at Malik and Bagri’s trial and was later convicted of perjury.

Deepak Khandelwal of Oakville, Ontario, said the shooting “just brings back all the horrible memories we’d had to go through for the last 37 years.”

“It’s like a nightmare that never stops giving,” he said.