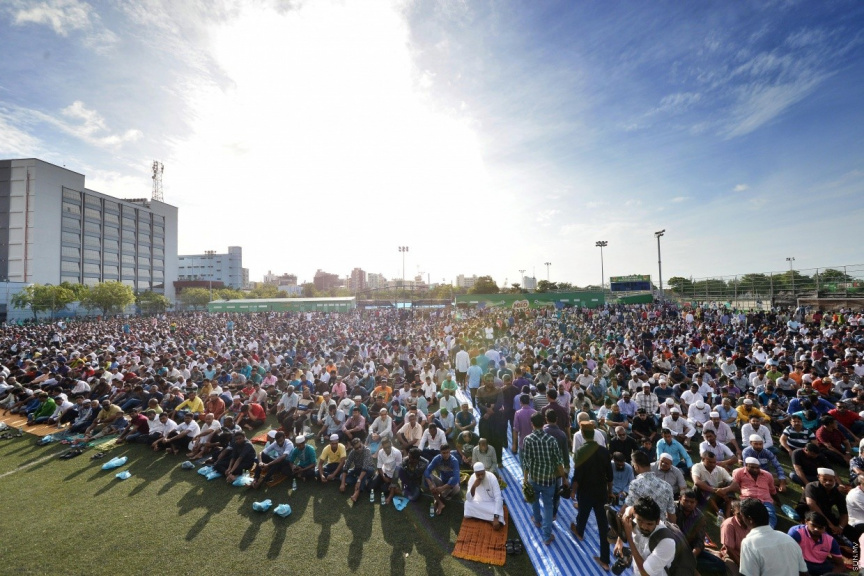 The congregation for the Eid prayer for Eid al-Fitr on 25 June 2017. (Sun Photo/Fayaz Moosa)

Islamic Ministry, on Wednesday, has stated that mass prayer in Male’ City for Eid al-Adha will be held this year at Maafannu Stadium.

The Ministry said that mass prayer for Eid al-Adha will be held at Male’ City, Vilimale’ and Hulhumale’ from the Greater Male’ Region.

In this regard, the locations for the mass prayer are Maafanu Stadium in Male’ City, Hulhumale’ Stadium (Synthetic Track) and Vilimale’ Stadium.

Islamic Ministry has instructed worshippers going for mass prayer to perform Wudhu from home and carry a personal praying mat and water bottle.

They also requested to carry a small non-plastic bag to store slippers and shoes.

The Ministry stressed that although the decision to hold mass prayer for Eid al-Adha has been announced – it is subject to weather conditions. Whereas the weather does not allow to hold the mass prayer, Eid prayer will then be held at mosques.

Permanent imam for Guraidhoo mosque delayed due to CSC