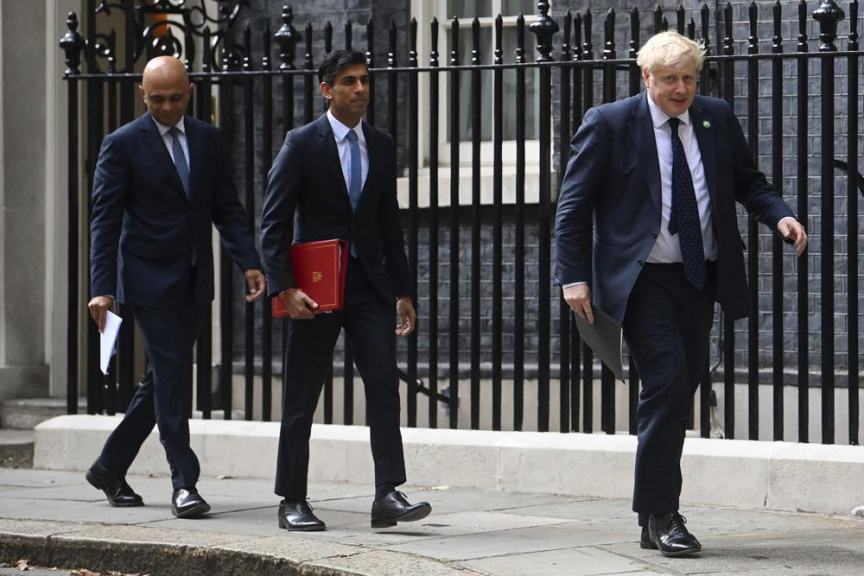 From left, British Health Secretary Sajid Javid, Chancellor of the Exchequer Rishi Sunak and Prime Minister Boris Johnson arrive at No 9 Downing Street for a media briefing on May 7, 2021. (Toby Melville/PA via AP)

LONDON (AP) — British Prime Minister Boris Johnson was clinging to power Tuesday after two of his most senior Cabinet ministers quit, saying they had lost confidence in Johnson’s leadership amid shifting explanations about his handling of a sexual misconduct scandal.

Treasury chief Rishi Sunak and Health Secretary Sajid Javid resigned within minutes of each other, costing Johnson the support of the men responsible for tackling two of the biggest issues facing Britain — the cost-of-living crisis and surging COVID-19 infections.

Both cited Johnson’s credibility after a day in which the prime minister was forced to backtrack on earlier statements about the scandal that has rattled his government for the past six days.

The debacle is only the latest to hit Johnson, who last month narrowly survived a vote of no confidence triggered by similarly shifting stories about lockdown-breaking parties in government offices.

In his letter of resignation, Javid said the confidence vote showed a large number of Conservative Party lawmakers had lost trust in Johnson.

“It was a moment for humility, grip and a new direction,” Javid said. “I regret to say, however, that it is clear this situation will not change under your leadership — and you have therefore lost my confidence too.”

“The public rightly expect government to be conducted properly, competently and seriously,” Sunak said. “I realize that this may be my last ministerial job, but I believe these standards are worth fighting for and that is why I am resigning.”

Both Sunak and Javid are seen as possible contenders to replace Johnson if he is forced out.

While the resignations heaped pressure on the prime minister, Johnson has in the past proven to be an adept politician, fighting off criticism to prolong his career.

But Scott Lucas, an emeritus professor at the University of Birmingham and a longtime political observer, said it would be difficult for Johnson to ultimately survive the departure of two such senior members of his Cabinet.

“He’s not going to go without a fight,” Lucas said. “I just don’t know how many people are left to fight alongside him.”

The latest scandal began Thursday, when Chris Pincher resigned as deputy chief whip amid complaints that he groped two men at a private club. That triggered a series of reports about past allegations leveled against Pincher and questions about why Johnson promoted him to a senior job enforcing party discipline.

Johnson’s office initially said he wasn’t aware of the previous accusations when he promoted Pincher in February. By Monday, a spokesman said Johnson knew of allegations that were “either resolved or did not progress to a formal complaint.”

That account didn’t sit well with Simon McDonald, the most senior civil servant at the U.K. Foreign Office from 2015 to 2020. In a highly unusual move, McDonald went public with claims that the prime minister’s office wasn’t telling the truth.

McDonald said in a letter to the parliamentary commissioner for standards that he received complaints about Pincher’s behavior in the summer of 2019, shortly after Pincher became a Foreign Office minister. An investigation upheld the complaint, and Pincher apologized for his actions, McDonald said.

“Mr. Johnson was briefed in person about the initiation and outcome of the investigation,” McDonald wrote.

Hours after McDonald’s comments were published, Johnson’s office changed its story again, saying the prime minister had forgotten that Pincher was the subject of an official complaint.

Then minutes before Javid and Sunak announced their resignations, Johnson told reporters that Pincher should have been fired from the government after a previous 2019 incident.

Asked if it was an error to appoint Pincher to the government, Johnson said, “I think it was a mistake, and I apologize for it. In hindsight it was the wrong thing to do.”

The shifting explanation from Johnson fueled discontent within the Cabinet after ministers were forced to publicly deliver the prime minister’s denials, only to have the explanation shift the next day.

Johnson’s authority had already been shaken by last month’s confidence vote. Although he survived, 41% of Conservatives voted to remove him from office. But until Tuesday his Cabinet had largely stayed put and loyal.

Concerns about Johnson’s leadership were fueled by his responses to months of allegations about lockdown-breaking parties in government offices that ultimately resulted in 126 fines, including one levied against Johnson.

Two weeks later, Conservative candidates were badly beaten in two special elections to fill vacant seats in Parliament, adding to the discontent within Johnson’s party and suggesting the ongoing accusations were finding a toehold with the public.

When Pincher resigned last week as deputy chief whip he told Johnson that he “drank far too much” the previous night and had “embarrassed myself and other people.”

Johnson initially refused to suspend Pincher from the Conservative Party, but he relented after a formal complaint about the groping allegations was filed with parliamentary authorities.

Critics suggested Johnson was slow to react because he didn’t want Pincher forced to resign his Parliament seat, setting up the Conservatives for another potential special election defeat.

Even before the Pincher scandal, suggestions were swirling that Johnson may soon face another no-confidence vote.

The existing rules require 12 months between such votes, but several Conservative lawmakers have suggested they support changing the rules in an upcoming vote on the issue.

Senior Conservative lawmaker Roger Gale, a long-standing critic of Johnson, said he would support a change of the rules.

“Mr. Johnson has for three days now been sending ministers — in one case a Cabinet minister — out to defend the indefensible, effectively to lie on his behalf. That cannot be allowed to continue,” Gale told the BBC. “This prime minister has trashed the reputation of a proud and honorable party for honesty and decency, and that is not acceptable.″

UK voters warm to new leader Sunak, but not his party

Sunak takes over as UK PM amid economic crisis

Boris Johnson drops out of race to be next UK PM