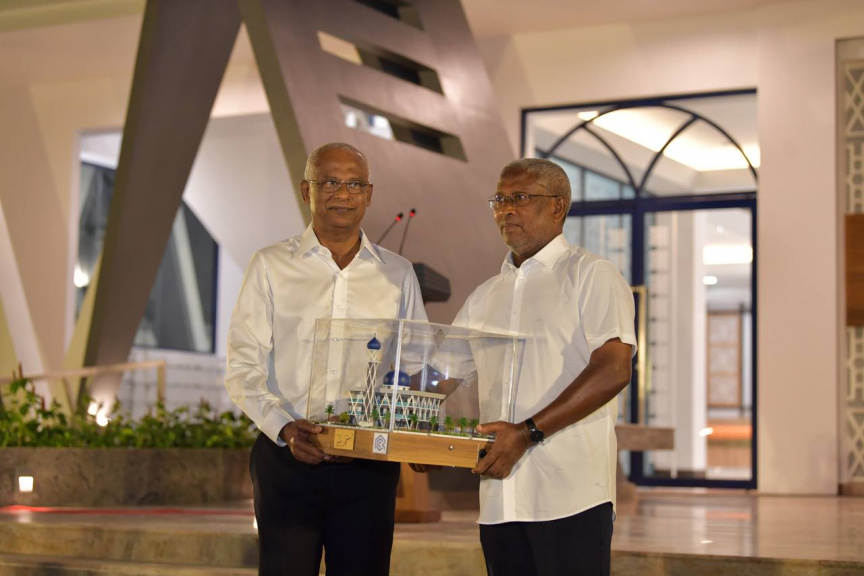 President Ibrahim Mohamed Solih accepting a replica of the "Masjid Rasheed" in Hulhumalé during the ceremony held to officially inaugurate the mosque. (Photo / President's Office)

A special ceremony was held at the newly developed mosque prior to Isha prayers for it.

The mosque was built by Rasheed Carpentry and Construction Pvt Ltd (RCC) as part of its corporate social responsibility in memory of the late Abdul Rasheed's parents.

Abdul Rasheed was the father to both the current Parliament representative for Dhangethi Mohamed Nazim and the CEO of MTCC Adam Azim.

Built to a contemporary design, the mosque has three floors and the latest renewable energy systems established.

It can accommodate 1,200 people at a time and includes a wing for women.

During the ceremony, the Managing Director of RCC presented the President with a replica of the mosque.

The President, accompanied by Vice President Faisal Naseem, and other government officials including the Minister of Islamic Affairs Dr Ahmed Zahir, and senior officials from RCC joined the Isha prayer congregation.

Land to be issued from Hulhumale’ to relocate garages

Major changes planned to the design of Hulhumale’ roads

Concerns over practice driving being in Hulhumale'