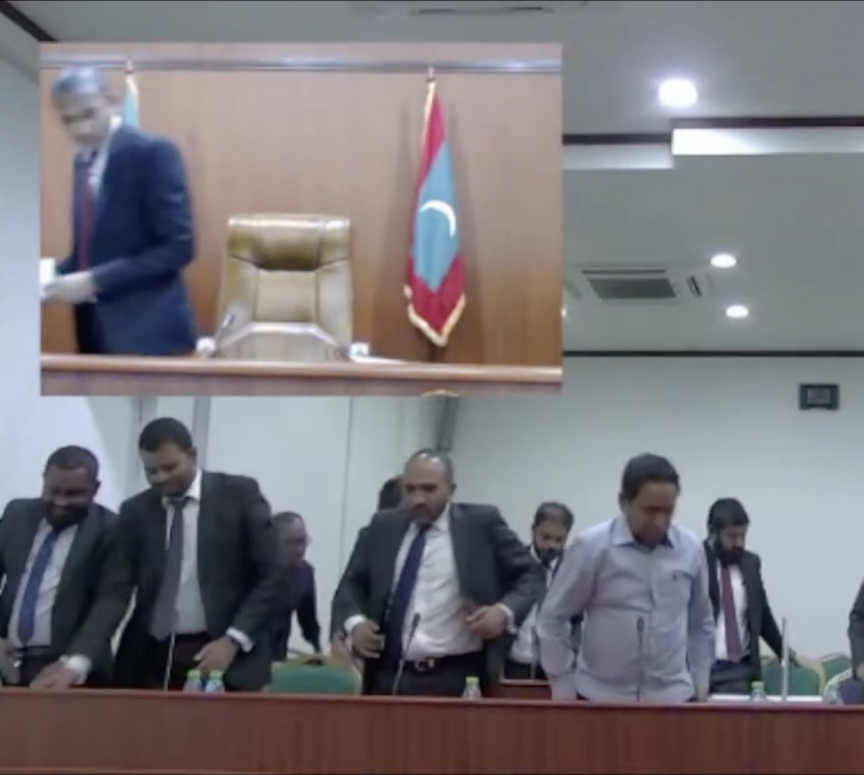 Screengrab from the most recent hearing in the Aarah case.

The hearing for the money laundering and bribery trial over the sale of V. Aarah for resort development, scheduled at the Criminal Court for Tuesday has been cancelled, after former President Abdulla Yameen Abdul Gayoom’s lawyers were unable to attend.

The sale of the island has produced money laundering and bribery charges against former Maldivian president Abdulla Yameen Abdul Gayoom, who is accused of misusing his position and taking a USD 1 million bribe to facilitate the sale of Aarah to Yoosuf Naeem, a former parliamentary representative for Felidhoo constituency, and laundering the money.

Naeem also has bribery charges against him in connection to the case.

Notably, today's cancelled hearing is the second one that was unable to be held this week.

On Sunday,  the hearing scheduled by the Criminal Court was cancelled due to Yoosuf Naeem’s health condition.

The court is currently hearing testimony from state witnesses.

Two state witnesses – both of them police officers involved in preparing forensic reports submitted as evidence in the case - have testified.

The court is also set to hear testimony from former MMPRC managing director Abdulla Ziyath and former vice president Ahmed Adeeb Abdul Gafoor - both of whom have been convicted of charges related to the MMPRC corruption and money-laundering scandal, and are now key state witnesses in the case.

Tech Minister: No plans to relocate cell towers to non-