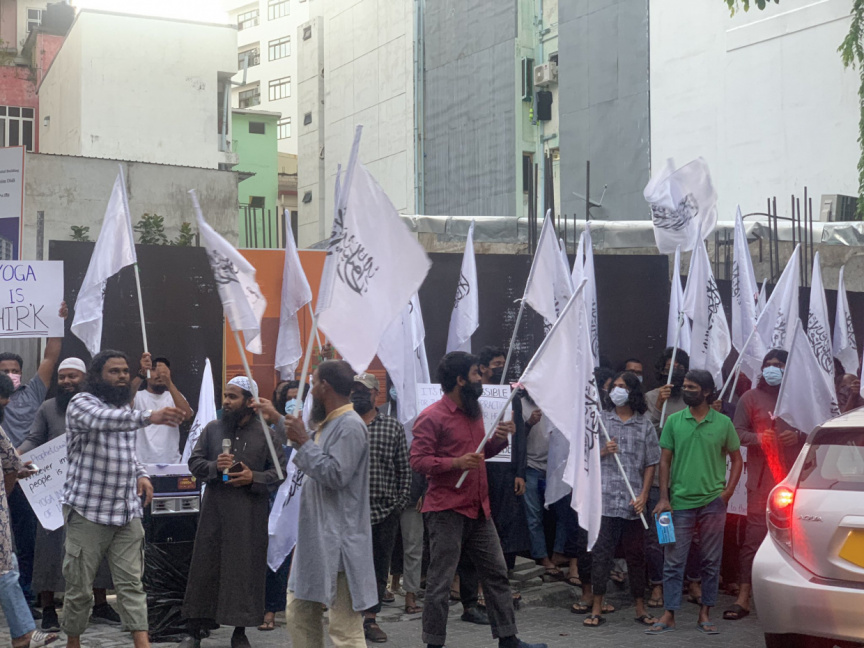 Group that stormed Galolhu National Stadium on Tuesday morning, obstructing activities underway at the stadium to mark the International Day of Yoga hold up flags containing verses from Shahada.

Maldives Police Service, on Friday, has confirmed that they have made three additional arrests in connection to the mob attack on the Yoga Day event at the national football stadium in Male’ City.

The Police have yet to disclose their identities.

With the new arrests – a total of 15 arrests have been made in connection to the case since Tuesday.

Six suspects were arrested on Tuesday, and six more on Wednesday.

Police released the identities of the six additional suspects in a statement on Thursday. They are:

They were presented before the Criminal Court for their remand hearing on Thursday.

Meanwhile, the six suspects arrested on Tuesday are:

They were presented before the Criminal Court for their remand hearing on Wednesday morning.

The yoga day event, organized by the Indian Cultural Center and the Sports Ministry, had begun at 06:30 am on Tuesday, and was attended by dozens of participants, including foreign ambassadors and diplomats.

A mob of angry protestors had stormed the stadium, and threatened and assaulted some of the participants, and destroyed property. They were carrying flags containing verses from the Shahada.

Police said in an earlier statement the case was being investigated as a serious matter, and that preliminary investigative findings established that some of the items used by the mob had come from the office of PPM.

In a TV interview following the incident, Sports Minister Ahmed Mahloof said Maldives began celebrating the International Day of Yoga during the administration of former president Abdulla Yameen Abdul Gayoom – the leader of PPM. He alleged the disruption of the event was politically motivated, and accused both PPM and Jamiyyath Salaf of involvement in the incident.

Both PPM and Salaf have issued statements denying involvement.