State witness: No indication of bribery in texts between Yameen and Naeem 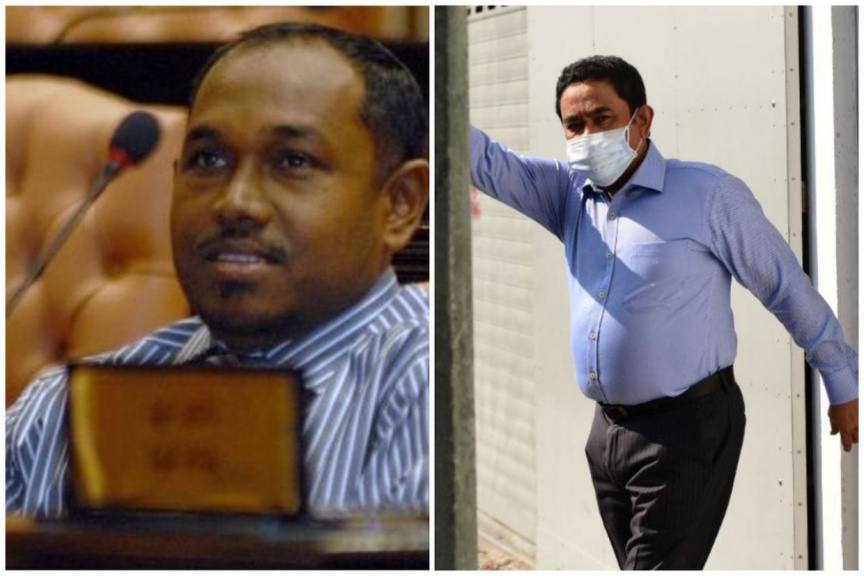 A state witness in the money laundering case against opposition leader, former President Abdulla Yameen Abdul Gayoom in connection to the sale of V. Aarah for resort development has testified of having taken no note of bribery in text messages exchanged between Yameen and Yoosuf Naeem, a former parliamentary representative for Felidhoo constituency, who is also a defendant in the case.

He is accused of misusing his position and taking a USD 1 million bribe as well as laundering the money in the sale of Aarah to Naeem.

Meanwhile, Naeem is charged with giving a bribe in the same case.

At a hearing held on Thursday, state witnesses gave their testimonies and were cross-examined.

One of the witnesses was Abdulla Shifaz who worked as a Digital Evidence Examiner at Police Forensic Service Digital Evidence Laboratory that had formulated the forensic report on Yameen’s phone.

Shifaz’s duty is to formulate reports after examining digital evidence, especially pertaining to mobile forensics, submitted to the laboratory.

During cross-examination – Shifaz was questioned by Yameen’s lawyer whether he had observed bribery of MVR 1 million from the data gathered in connection to the case.

State prosecutor had objected to the question – stating the witness’s responsibility was not to identify whether a bribe has taken place but to gather text messages exchanged with a particular contact. Stressing that remaining requisites would be completed by investigative officers – the state prosecutor said that the witness will not have to answer the question.

In response, the defense lawyer said that the witness should be able to answer whether he took note of any bribery from the messages exchanged between Yameen and Naeem.

The judge overruled state’s objection – and ordered the witness to answer the question.

Responding to the question – Shifaz said that the report he formulated would contain the messages exchanged between Yameen and Naeem.

“I cannot exactly say what is written on all the messages exchanged between both those numbers. Nevertheless, this report shows one of the messages. It states whether ‘that thing should be taken,” he had said.

The defense, unsatisfied with the answer, repeated the same question. Shifaz had then given a more direct answer.

“What I am saying is this report shows only one message sent from this number. From this message, I do not observe the sort of thing (bribery) you are asking,” he had said.

After receiving the response desired – the defense had rested.

Although two witnesses were scheduled to give their testimonies on Thursday, the hearing concluded after the lengthy testimony and cross-examination of just one witness.