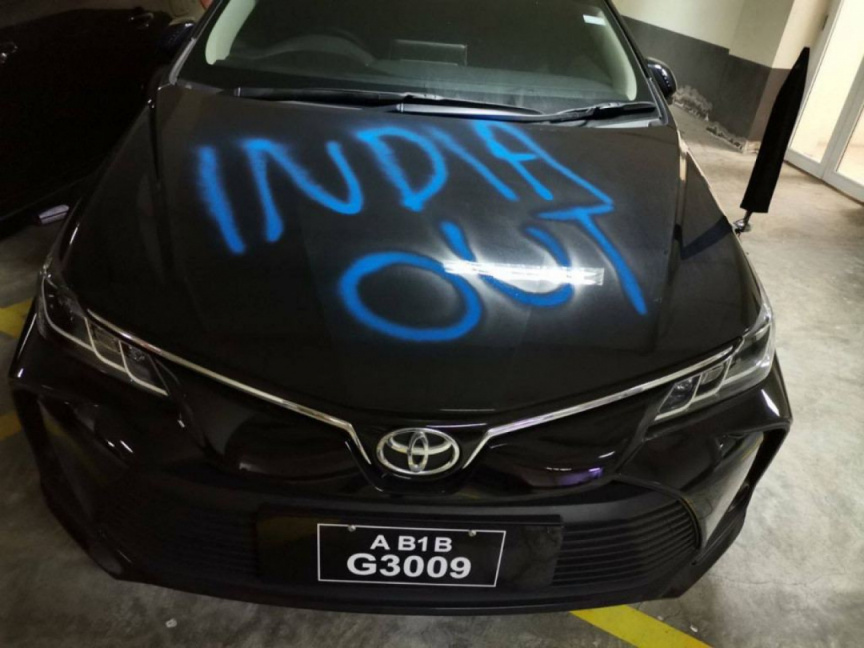 A car belonging to a cabinet minister which was vandalized with 'India Out' grafitti.

The man who vandalized the cars of three cabinet ministers on Sunday, with ‘India Out’ graffiti, has been remanded in police custody for five days.

A Police Spokesperson told Sun that a 30-year-old Maldivian man was arrested over the vandalism on Monday night.

The Spokesperson detailed that when presented before court today for a remand hearing, he was remanded in police custody for five days.

Police stressed that investigation regarding the vandalism was still underway.

The cars of the ministers that were vandalized whilst parked at Velanage parking zone were of Education Minister Dr. Aishath Ali, Economic Minister Fayyaz Ismail and Fisheries Minister Dr. Hussain Rasheed Hassan.

A car belonging to a private citizen parked at the parking zone near People’s Majlis was also vandalized with ‘India Out’ graffiti today.

Police said that the vandalisms were being investigated as cases pertaining to damage to property.

‘India Out’ was found written in bold letters in green spray paint on the outer wall of Kenereege on May 31.

However, the opposition continued to put up banners and graffiti the walls of buildings with slogans linked to the movement – which has been removed by the police.