Economic Minister: Maldives can still take on debt, need for investing in economy 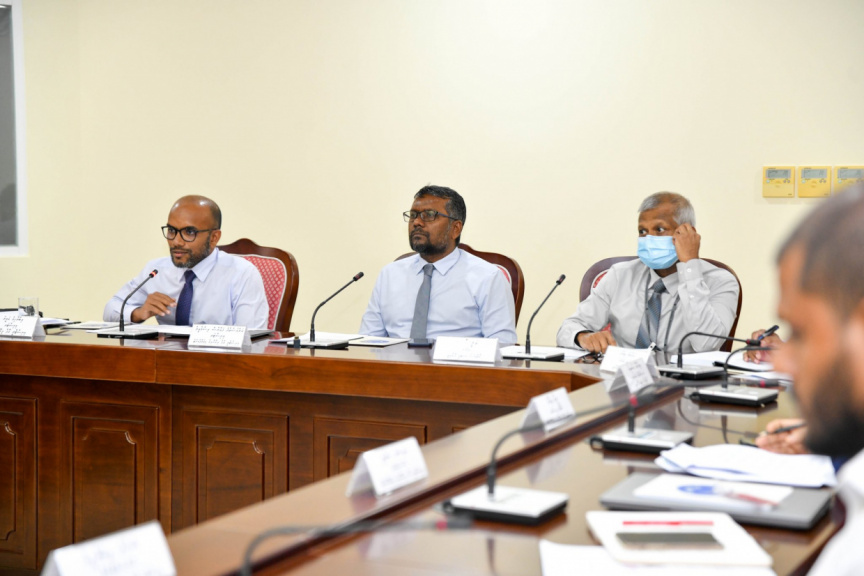 From the meeting held by the Parliament’s Public Accounts Committee with representatives from Economic Ministry, Ministry of Finance and Treasury, and Maldives Monetary Authority (MMA) in order to discuss debt and the work being done to manage it. (Photo / Parliament)

Minister of Economic Affairs Fayyaz on Monday said that the current situation in Maldives still allows room for debt, and it should be taken and invested in large-scale projects to boost the economy.

The Parliament’s Public Accounts Committee met representatives from Economic Ministry, Ministry of Finance and Treasury, and Maldives Monetary Authority (MMA) in order to discuss debt and the work being done to manage it.

While speaking at this meeting, Minister Fayyaz said that in order to finance various large-scale projects, more debt needs to be taken, and added that the country’s economy was moving forward.

“Despite obstacles, the economy is moving forward in the right direction.”

Further elaborating this he noted that though the situation due to the Covid-19 pandemic and Ukraine-Russia conflicts have brought up hardships, the biggest obstacle was people saying the country was going bankrupt.

“We are not in a situation where we are unable to pay back the debt. There are obstacles. [We] do not deny that. Because of the talks of the country going bankrupt, investors are hesitating.”

He highlighted that during the height of the pandemic, the government managed without allowing businesses to go bankrupt and lose employment by taking debt.

Minister reiterated that the economy was headed in the right direction, and said that looking at the number of arrivals, the figures until June 9 this year were higher than the same period in 2019. He said that there was a difference of about 42,000 in arrivals between these two years, and that too shows the economy is on a good path.

Furthermore, he credited the 13 percent growth of GDP to the Covid-19 Economic Stimulus Packages and said that even in the toughest situation, an estimated 7.9 growth will be attained next year.

After a long hiatus, President Ibrahim Mohamed Solih met with the press on Wednesday, June 8. During this meeting, he provided assurances that the situation in the country has not dropped to the level where debts cannot be repaid.

Gov. engages in discussions to ease travel for pilgrims