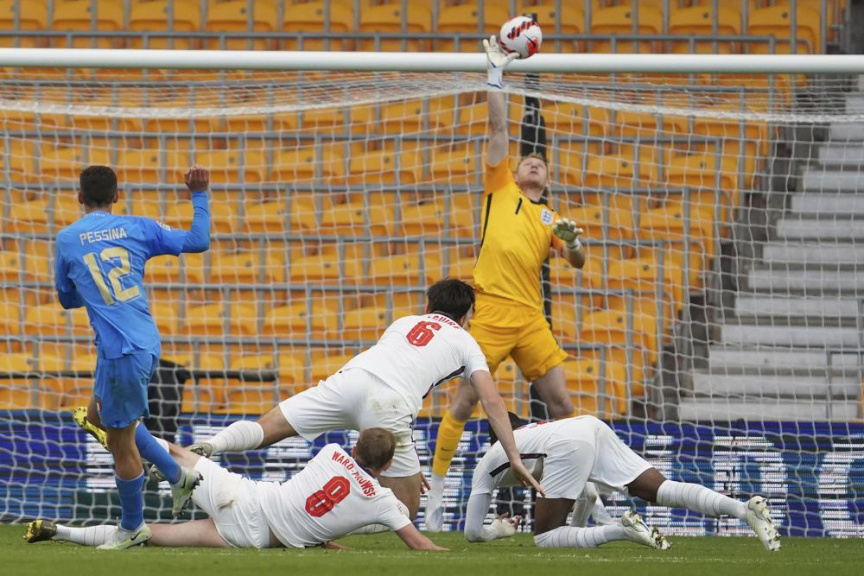 Goalkeeper Aaron Ramsdale of England makes a save during the Nations League soccer match between England and Italy at Molineux Stadium in Wolverhampton, England, Saturday, June 11, 2022. (AP Photo/Jon Super)

LONDON (AP) — It was a night of stalemates for the big teams in the Nations League on Saturday, including a drab scoreless draw in the rematch of last year’s European Championship final.

England was held 0-0 by Italy to leave Gareth Southgate’s side without a win in three matches in the top-tier Group 3 this month as it prepares for the World Cup.

Just a couple of thousand schoolchildren were allowed into the Wolverhampton stadium as part of England’s punishment for its fans’ disorder ahead of the Euro 2020 final at Wembley, which Italy won in a penalty shootout.

Mason Mount hit the crossbar early on for England and home goalkeeper Aaron Ramsdale denied Sandro Tonali before a second half disrupted by many substitutions as both coaches rotated their squad after a grueling season.

While last-place England is headed to Qatar in November, being top of the group will be no consultation for the Italians who did not qualify for a second straight World Cup.

Hungary, which beat England last Saturday, is a point behind Italy, after drawing 1-1 with Germany. The goals came in the opening nine minutes with Jonas Hofmann slotting in Germany’s equalizer to cancel out Zsolt Nagy’s strike in Budapest.

There were also two draws in Group 4. The Netherlands had to come from two goals down against Turkey to draw 2-2 after Davy Klaassen and Denzel Dumfries scored inside three minutes early in the second half. The Dutch had a chance to seal a third straight win but Memphis Depay’s penalty hit the post to leave Louis van Gaal’s side with seven points.

Belgium is on four points in second place after Youri Tielemans’ low finish from the edge of the area was canceled out by Brennan Johnson’s first Wales goal in the 86th minute. It was the first point for Wales from its three games but the priority is preparing for the World Cup after a 64-year wait to qualify again for the FIFA showpiece ended last weekend.

Ukraine, which lost to Wales in the World Cup playoff, earned its second straight Nations League win by beating Armenia 3-0 with goals from Ruslan Malinovskyi, Oleksandr Karavaev and Vitaliy Mykolenko. The game was played on neutral territory in Lodz, Poland because Ukraine cannot play at home since the invasion by Russia. Ireland, which lost to Ukraine in midweek, beat Scotland 3-0 in the other game in the second-tier group.