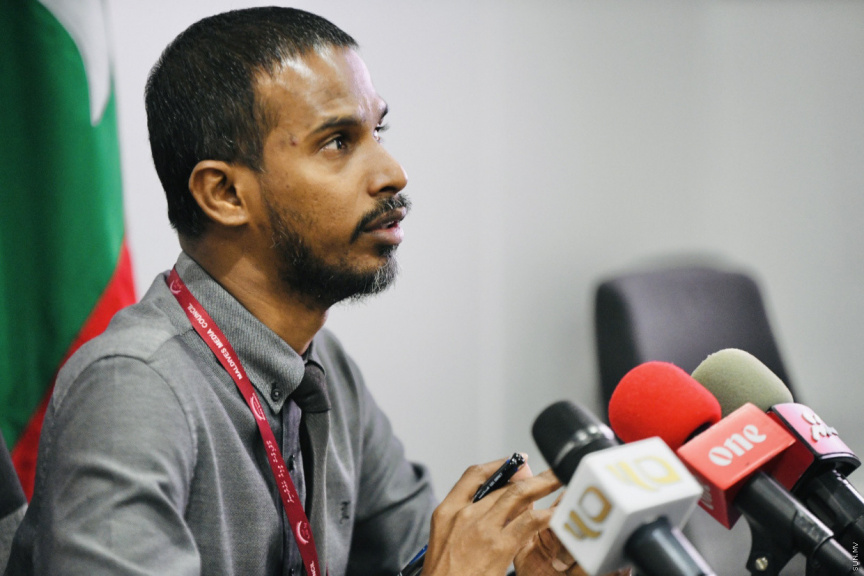 President of Maldives Media Council (MMC) Shahuban Fahmy announced his resignation from the post on Tuesday. failed to secure an adequate number of votes.

During a press conference held at MMC, Shahuban denied all allegations against him and said that they were all politically motivated.

He went on to say that since the day he became President of MMC, there were those who wanted the position, and certain members had attempted to overthrow him previously as well.

“The journey at MMC was not an easy one. I faced many obstacles on multiple occasions, and [they] have been working to remove me as president for a long time now. This is not something new for me.”

Speaking further, Shauban said that he’s not done anything that could harm the media or journalists, and has always worked within the constitutional lane. He added that from his time as president, positive changes have been brought to MMC.

“The changes [brought by me] can be seen. Since I came, numerous things have been done in different forms that were previously not done at MMC. A WhatsApp group with journalists was also created after I took the position. That was in order to strengthen the relationship with journalists.”

Shahuban said that despite the positive changes, it will not be accepted when the members are greedy for his position. He added that even though votes were taken after speaking false rumours, he would not be paying any heed to that.

He also reiterated that being accused of a crime does not mean a person is convicted of it until proven.

“I have not done anything that could get me removed from my post. All the talks regarding my company are for political gain. I except myself from all the accusations.”

In addition to this, Shahuban revealed that the accusation of money laundering against him has made it difficult to be out on the roads, and expressed concern over personal safety.

“[People] call me a thief when I am out on the road with my wife and children. They ridicule and harass. These are dismaying things. Such are unacceptable things.”

Stating that he always wishes the best for MMC and journalists, he said that he was resigning as being in this position no longer guarantees his personal safety.

“For my personal safety and [since I believe] this is the best cause of action for media and MMC, I am resigning from my position as MMC President from today 13:39 onwards.”

He stressed that the resignation was in no way his acceptance of the accusation against him, but only since his being in the position had made MMC nonfunctional.

“Those members eager for the position [of presidinet] no longer want to do anything pertaining to MMC as long as I am president. I do not want that to happen,” said Shahuban.

The announcement comes at a time when a money-laundering investigation recently commenced against him, over his involvement with his brother Alhan Fahmy’s King Forex Trading company’s Ponzi scheme scandal.

Notably, the MMC has attempted twice to remove him from the post by taking no-confidence votes against him, the most recent one which was held less than a day prior.

However, in both rounds of voting, due to an inadequate number of votes, MMC was unable to dismiss him.