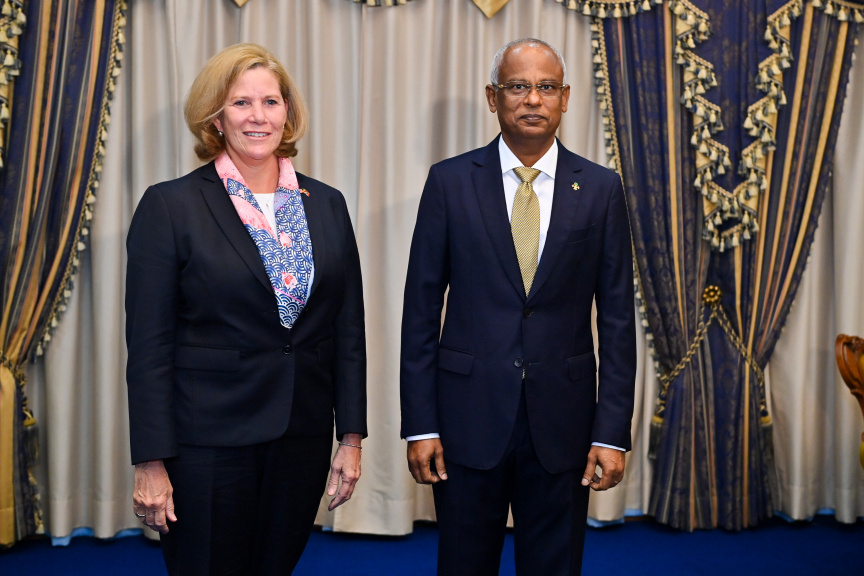 Maldivian President Ibrahim Mohamed Solih (R) and the Chargé d’affaires of the Mission of US to the Maldives, Andrea Appell (L) pose for pictures ahead of a meeting on May 26, 2022. (Photo/President's Office)

Maldives and Unites States have discussed the process of opening designated embassies in the Maldives and in the US, respectively.

The discussions took place in a meeting between Maldivian President Ibrahim Mohamed Solih and the Chargé d’affaires of the Mission of US to the Maldives, Andrea Appell, at the President’s Office on Wednesday afternoon.

At the meeting, President Solih said the move would improve cooperation between the two countries and further enhance the Maldives-US relations.

He thanked Appell for the continued assistance from the US in all sectors, particularly noting the aid provided during the COVID-19 pandemic.

Appell spoke of how the two countries had established diplomatic relations over 60 years ago and said that the US was proud of the longstanding relationship.

She noted Maldives’ achievements in the global stage, despite the country’s size.

They also discussed ways to improve Maldives’ economy and defense and security in the region.