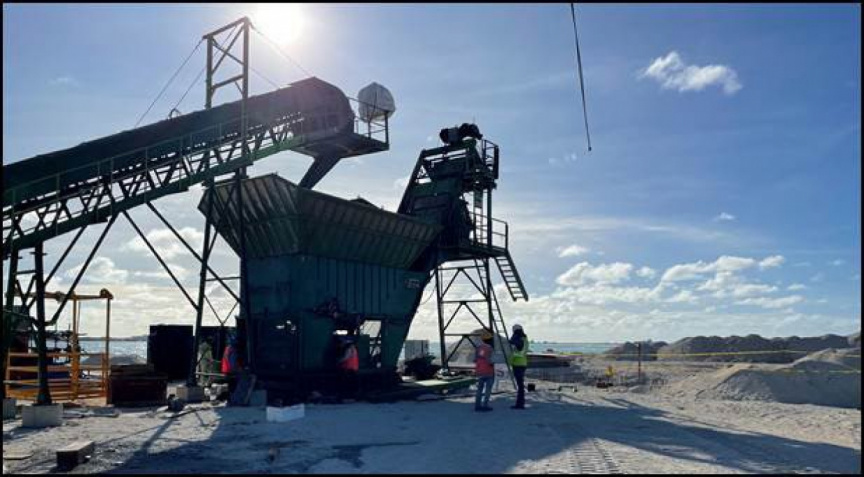 Speaking about the most recent updates for the project, the company’s Deputy Project Manager V. Madhusudhan revealed to Sun that the preliminary survey, including substantial geotechnical investigation works were already finished, and that they have now begun design works based on the survey results.

“We are happy to share that we have completed the first land Test Pile works last week. We will soon commence construction of the temporary access bridge. Subsequently, we shall begin construction works for land working pile and then move to marine working pile.”

Discussing the effects the project might have on the nearby marine life, he acknowledged that they were aware of the sensitive nature of the ecosystem, and detailed the practices adopted to ensure “the rich marine biodiversity is not disturbed.

-   Segregation and disposing of waste through WAMCO

Additionally, Madhusudhan noted that a large portion of these measures was executed by local contractors, due to their expertise and deeper understanding of the marine ecosystem. He added that various other r activities like surveys, fencing, tree plantation, civil works, logistics and material handling are being handled by local players.

“We understand the overall significance of the Greater Male Connectivity Project for the people of Maldives and how critical it is for the country’s social and economic growth. We are confident and committed to delivering the project as per schedule.”

Responding to a question regarding the challenges in conducting the geotechnical survey, Madhusudhan noted that the survey was the most significant preconstruction activity before any project.

“This activity assumes even a higher level of importance for deep-sea marine projects to study the geotechnical parameters of sub-seafloor sediments. Another challenge being presence of calcarenite rock with large cavities. Despite challenges like rock quality, rough sea conditions, we have completed survey for a substantial portion of our project scope.”

Speaking further about challenges, he said that though they were hopeful and focused on delivering the project as per schedule, it was unfortunate due to the Russian-Ukraine conflicts, commodity prices were impacted, along with timely availability constraints.

He added that as per recent market trends, there is a 30% - 40% rise in the price of fuel, materials price and logistics.

The project involves the construction of a 6.74-kilometre-long bridge along with a causeway link. According to the Indian High Commission in Maldives, the bridges between islands will measure 140 metres.

Male’-Vilimale’ to be linked via bridge in July 2023