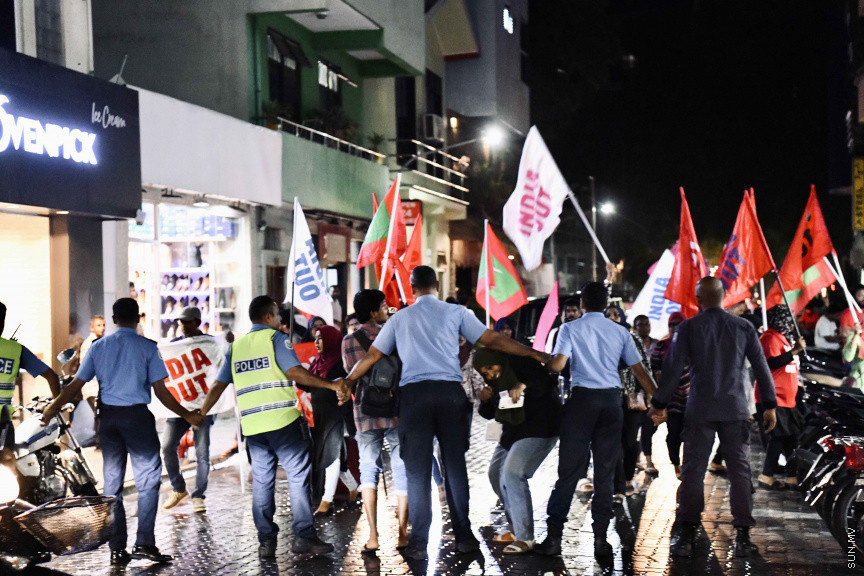 Maldives Media Council (MMC) has asked the police for an investigation into the allegation a police officer threatened journalists who had been covering the ‘India Out’ protest staged by the opposition PPM-PNC coalition in Male' City on Wednesday night.

MMC said on Thursday that an incident involving journalists getting threatened by a police officer, identified only as ‘Solih’, had come to the council’s attention.

MMC said it has asked the police to investigate the case, and share details of the incident.

The associations, in a joint statement on Thursday afternoon, called on all relevant institutions to ensure that all attempts to intimidate, harass and harm journalists are taken seriously.

“We also call on the State and all relevant institutions to ensure that freedom of expression and assembly is protected and safeguarded as a fundamental right enshrined in our Constitution,” said Transparency Maldives and MJA in the statement.

The protest was staged after police arrested two people on suspicion of planning and organizing the ‘India Out’ movement – banned with a presidential decree last April. One of the suspects arrested was former Hoarafushi MP Mohamed Ismail.

The protestors, armed with ‘India Out’ banners and flags, began the protest from in front of the PPM headquarters at approximately 09:00 pm Wednesday. They later headed towards the Majeedhee Magu, at which point the riot police dispersed the protestors.

Police took three protestors into custody on Wednesday, all of whom were released the same night.

Suspension on MMC member lifted due to lack of evidence