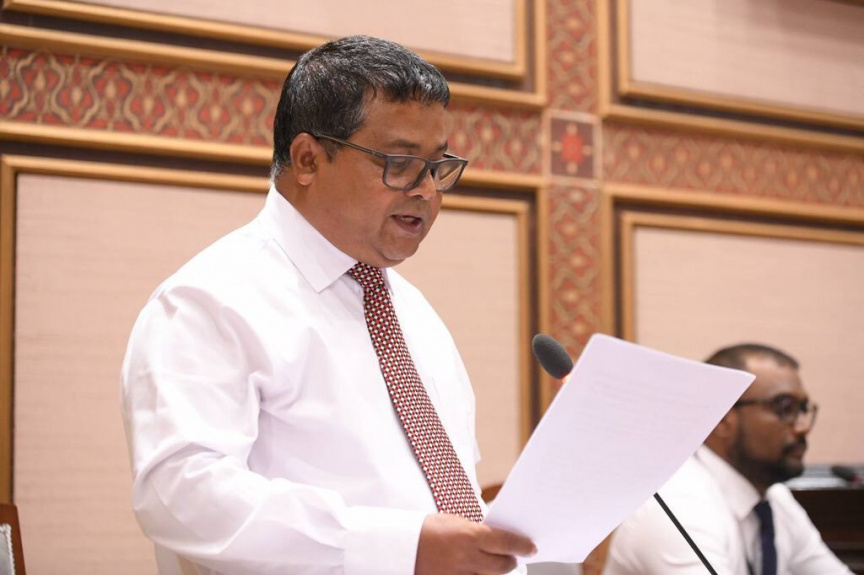 Fisheries Minister Dr. Hussain Rasheed Hassan responds to questions at the Parliament on May 18, 2022. (Photo/People's Majlis)

Fisheries Minister Dr. Hussain Rasheed Hassan told the Parliament on Wednesday that the work on building an ice plant in AA. Rasdhoo is expected to be complete, and the plant open for services to fishermen in March next year.

Hussain was summoned to the Parliament on Wednesday morning in response to an inquiry by Thoddoo MP Hassan Shiyan regarding an update on the Rasdhoo ice plant project.

Hussain said the project was opened for tender for the first time on September 9, 2021. He said that the project had received only one bid when the tender period expired on October 21, 2021.

He said that the bidder had been unregistered, and that the Fisheries Ministry therefore decided to reject the bid.

Hussain said the project was reopened for tender after making changes to the eligibility criteria, including extending the project completion duration from six to eight months, and lowering the financial and experience criteria.

The project was reopened for tender on April 21. The tender period will expire on June 8.

Hussain said Fisheries Ministry expected to sign a contract with the winning bidder in the third week of June.

“We expect to sign with the bid winner in the third week of June. We expect the ice plat will be complete and operational eight months after the signing, in March 2023,” he said.

The 25-ton ice plant project is financed with support from the Saudi government.