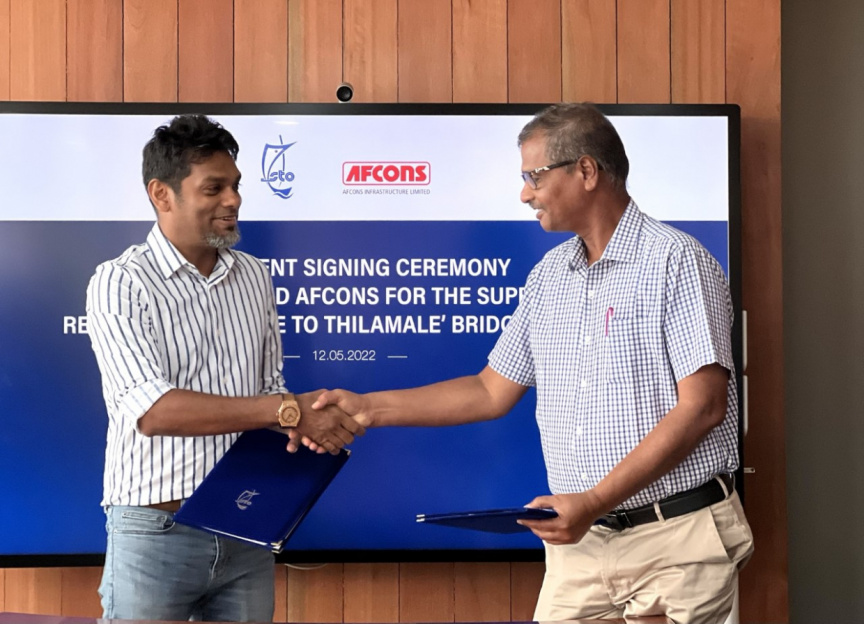 From the agreement signing ceremony between STO and AFCONS. Managing Director, STO Hussain Amru Mohamed Rashad (L) and Deputy Project Manager of AFCONS, V. Madhusudhan (R) signed the agreements from their respective companies on May 12, 2022. (Photo/STO)

The State Trading Organization (STO) on Thursday signed an agreement with Afcons to supply Readymix Concrete to Thilamale’ Bridge project.

STO detailed that under this project, a total of 7,500 CMB of readymix concrete will be supplied.

Moreover, STO revealed that over the course of the past five months, perpetrations were made to undertake this project, including establishing machinery at their readymix plant so as to provide concrete that meets the standards set by Afcons.

The government officially signed and handed over the Thilamale’ Bridge project to Afcons on August 26, 2021.

The project involves the construction of a 6.74-kilometre-long bridge along with a causeway link. According to the Indian High Commission in Maldives, the bridges between islands will measure 140 kilometres.