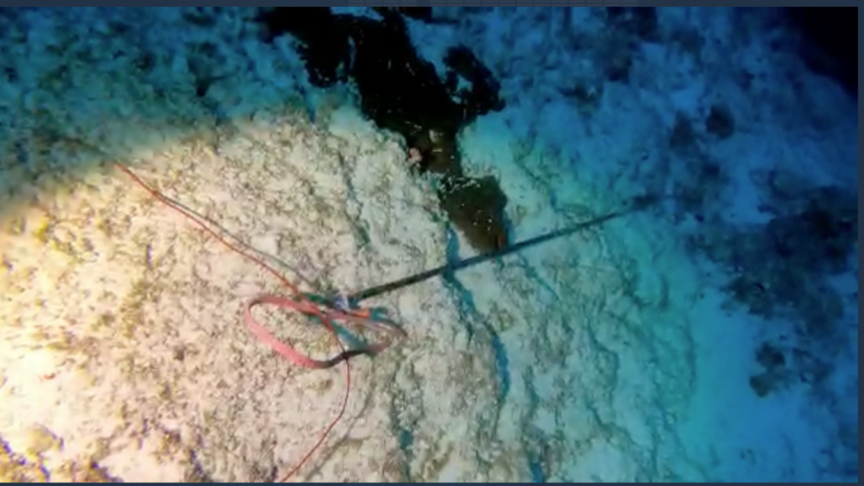 Fishing tool believed to belong to Mohamed Saeed found during authorities' search for him. The 35-year-old diving instructor went missing diving off the coast of Fuvahmulah City on Monday.

A tool for fishing believed to have been used by the local man who went missing diving off the coast of Fuvahmulah City on Monday – has been discovered amidst efforts to locate him.

In this regard, coastguard divers and harbor patrol vessels have been canvassing the sea area continuously over the past two days. Moreover, the operation saw a further expansion yesterday, with MNDF's Donier aircraft and helicopter joining in for aerial searches.

A new development was reported by MNDF last night; the discovery of a fishing tool believed to have been used by Saeed 59 meters below sea level by coastguard divers. Following this, 550 meters have been searched by the divers. As the area has a natural slope, it is believed that the point between where the tool was discovered and the searched area has a depth of around 70 to 100 meters.

As of last night, MNDF reported having searched a total of 40 nautical miles via sea and air.

MNDF underscored that the operation will continue over the next few days despite the challenges faced in light of extreme weather conditions. They also extended gratitude to the public for the assistance rendered in search efforts for Saeed.

Saeed ventured into the waters at Fuvahmulah ‘Tiger Shark’ dive point at approximately 14:30pm on Monday afternoon. At that time, he was wearing a black diving suit, black fins and a black mask – also was reportedly carrying a yellow-orange balloon with him, as per Coastguard.

He was reported missing to MNDF’s Maritime Rescue Coordination Centre (MRCC) at around 15:36pm on Monday afternoon.

MNDF has requested vessels traveling through the area to be on the lookout for Saeed – instructing anyone with information regarding Saeed’s whereabouts to contact Coastguard’s hotline number at 191 without delay.

Case of threat against Yameen sent to 241 Committee