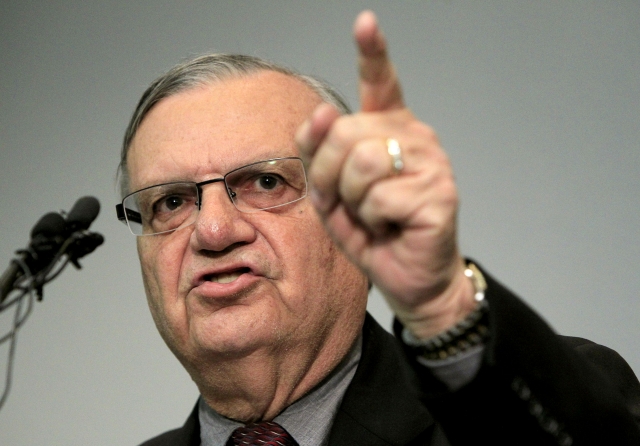 PHOENIX (AP) — A judge will hear arguments Thursday in a lawsuit that alleges racial profiling in immigration patrols conducted under a man who called himself "America's Toughest Sheriff," a week after U.S. authorities accused his office of a wide range of civil rights violations.

The lawsuit against Maricopa County Sheriff Joe Arpaio's office was filed by a handful of Latinos who say officers based some traffic stops on their race, had no reason to pull them over and made the stops so they could inquire about their immigration status.

It's one of a mounting number of legal challenges against the office.

Arpaio has denied the racial profiling allegations. He faces a Jan. 4 deadline for saying whether he wants to work out an agreement to settle allegations. The Justice Department has said it's prepared to sue Arpaio and let a judge decide the matter.

One lawsuit filed this week says employees violated a female inmate's rights when they kept her shackled before and after her 2009 Caesarean section and ignored her pleas for help in Spanish.

Also this week, a man found unresponsive in a jail cell after fighting with deputies at a Phoenix jail over the weekend died after being taken off life support. Activists say the death raises more questions about practices under Arpaio.

On Thursday, U.S. District Judge Murray Snow will consider possible sanctions against the sheriff's office in the lawsuit alleging racial profiling over its acknowledged destruction of some records of the patrols, along with a request by Arpaio's lawyers to dismiss the case.

During the patrols known as "sweeps," deputies flood an area of a city — in some cases, heavily Latino areas — over several days to seek out traffic violators and arrest other offenders. Illegal immigrants accounted for 57 percent of the 1,500 people arrested in the 20 sweeps conducted by the office since January 2008, according to figures provided by Arpaio's office.

Apart from the U.S. civil rights probe, a federal grand jury has been investigating Arpaio's office on criminal abuse-of-power allegations since at least December 2009.