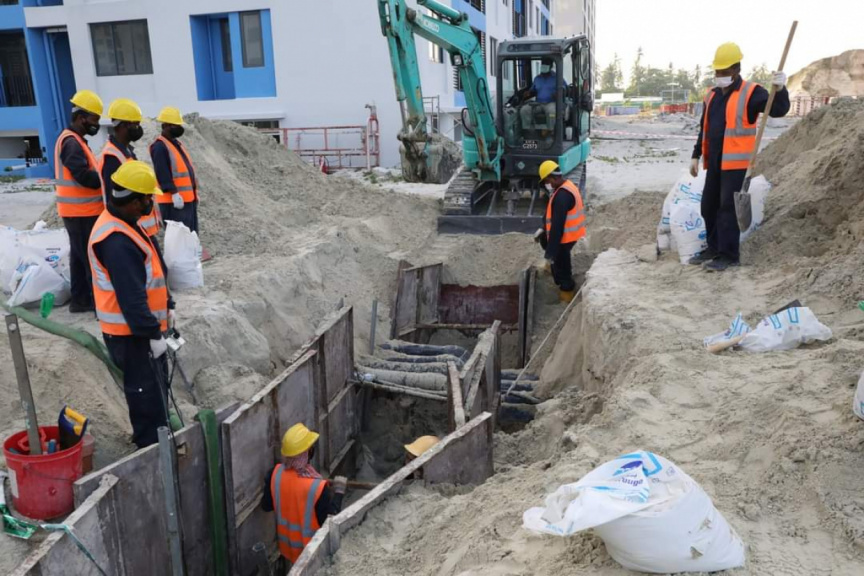 Employees of MWSC carry out works pertaining to water and sewerage. (Photo/MWSC)

Parliament, on Monday, has passed the bill proposing amendments to the Water and Sewerage Act to include a maximum MVR 1 million fine for violation of Ground Water Act.

The bill to amend the Water and Sewerage Act was submitted to the Parliament by North Kulhudhuffushi MP Yasir Abdul Latheef, on behalf of the government.

The bill was passed at today’s sitting, by the unanimous vote of 47 members who took part in the vote.

Following their review of the bill, Environment and Climate Change Committee had brought several amendments to it. In this regard, an addition was made to the article laying down the maximum MVR 1 million fine for violation of Ground Water Act – to also include a minimum fine amount of MVR 5,000.

The Committee greenlighted the amendment proposed in the bill for the formulation of regulations pertaining to the design, establishment and service of water and sewage systems under the guidance of relevant authorities – and the amendment proposed to set down standards for certification of equipment used for the establishment of water and sewerage systems.

Environment and Climate Change Committee decided against passing three amendments proposed to the bill. They are:

This amendment was rejected by the Committee, citing that service providers, under existing law, already formulate action plans annually based on the goals they have achieved – which they had deemed as the best course of action.

Committee reasoned that they are rejecting the amendment as they feel it lowers encouragement of the use of renewable energy in water production which can hinder the Maldives from achieving its goal to become a net-zero country.

This amendment was rejected by the Committee as such rules on the issuance of an exclusive operating license would be necessary under a circumstance the license needs to be issued.

Gemanafushi MP Ahmed Saeed proposed an additional amendment to the report passed by Environment and Climate Change Committee with the aforesaid changes to the bill. His amendment was to ensure that water plant operator licenses are issued after guaranteeing the electricity required to power the plants are sourced from renewable energy. With Gadhdhoo MP Ahmed Zahir seconding the proposal, the amendment had been passed and included in the bill.