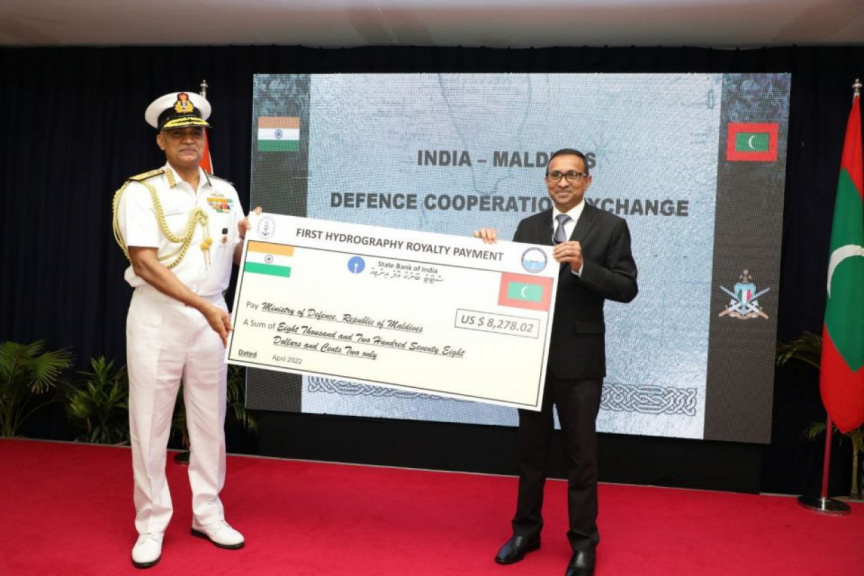 India hands over the cheque containing royalty fee entitled to Maldives from the sale Maldivian hydrography charts sold by the country. (Photo/MNDF)

India has handed over USD 8,278.02 as a royalty fee to the Maldives from the money earned by the sale of charts formulated following their hydrographic survey of the Maldives.

Maldives and India executed an agreement for the latter to carry out a hydrographic survey of the former – for which physical works had commenced on last year’s January 31. Maldives National Defense Force (MNDF) has previously stated that both countries can benefit from drawing up the hydrography charts of Maldives in accordance with international standards following a comprehensive survey of Maldivian seas.

At a ceremony held at Bandaara Koshi on Tuesday, over a year later, India handed over the cheque containing the royalty fee entitled to Maldives from the sale of the charts.

The cheque was received by Deputy Minister at Defense Ministry Hassan Zameel on behalf of the Maldivian government.

Although the cheque was handed over, the total amount earned by India from the sale of the charts has not been disclosed.