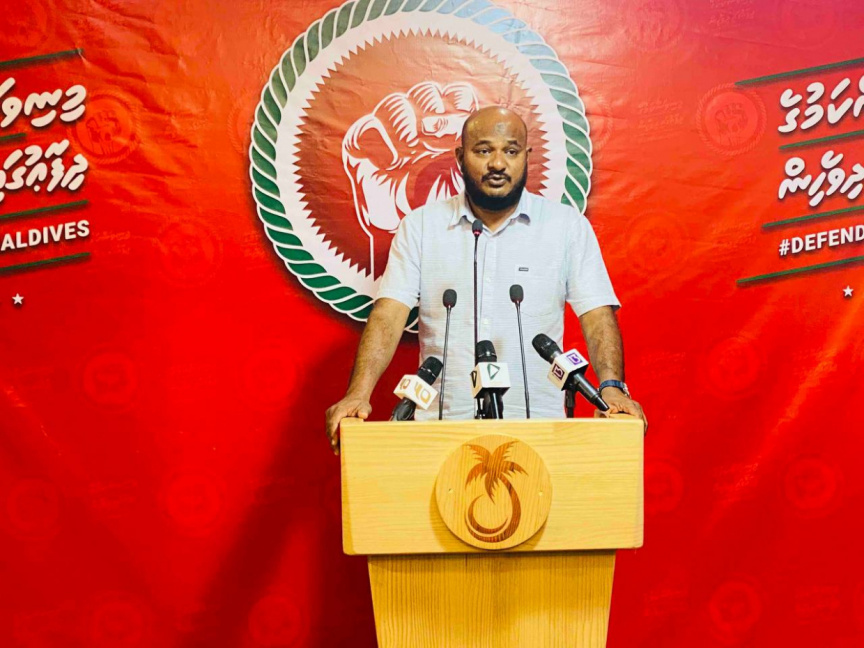 Opposition coalition comprising of Progressive Party of Maldives (PPM) and People’s National Congress (PNC), on Thursday, has stated that they have been denied permit to hold religious lecture over the fact that their request letter had ‘India Out’ stamped on it.

Speaking at a press conference held this afternoon, PNC’s Vice President, Male’ City Council’s Hulhumale’ constituency member Ibrahim Shujau said that the coalition had requested a permit to hold a religious lecture following the announcement by Islamic Ministry stating to allow the same.

“Sometime yesterday, we informed Islamic Ministry via a letter our wish to hold a religious lecture program at King Salman Mosque. In the letter, we requested to hold the lecture on Thursday night,” he had said.

Shujau said that following no response from the Ministry – he had contacted Islamic Minister. He detailed having been told by the Minister that the request letter sent by the opposition coalition had been against regulations on sending letters.

“Minister said because it had a certain stamp. I asked whether it was against the regulations because of the ‘India Out’ stamp in the letter. Replied yes. I told Minister, it had nothing to do with him,” he had said.

Following this, Shujau said that the Minister had taken back his words – now stating that King Salman Mosque was unavailable and that political parties were no longer issued permit to hold religious lectures.

Shujau also strongly criticized only Adhaalath Party being given the opportunity. He added that a religious wing also exists in PPM, whereas they hold ‘Ihya Programs’ every Ramadan. He further said that the opposition had requested permit to hold the lecture as Adhaalath Party had held one with their logo in place.

“Different scholars in the different wings of our party wishes to deliver religious lectures to the Maldivian society during this holy month. We are very sad that we were not granted the permit,” he added.

Sun has been unable to obtain a comment from Islamic Ministry regarding the issue.