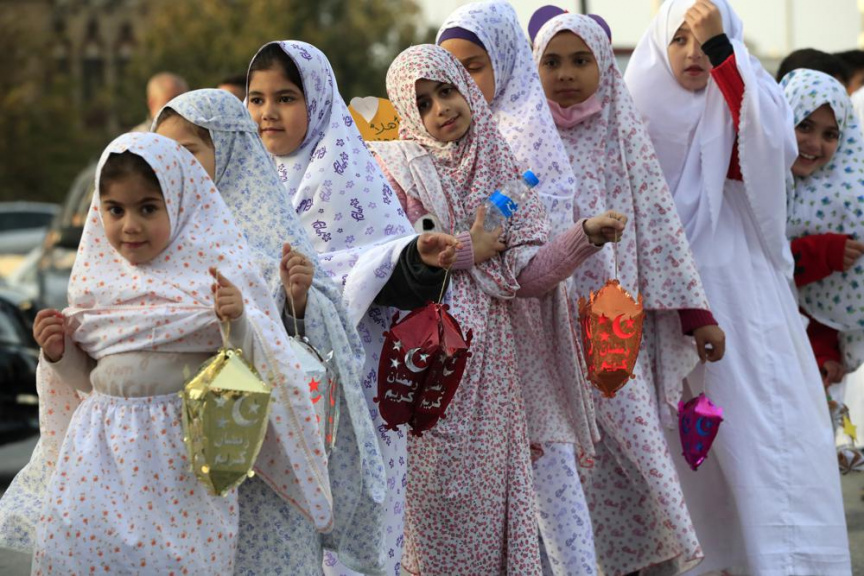 BEIRUT (AP) — Muslim-majority nations, including Saudi Arabia, Egypt, Syria and the United Arab Emirates, declared that the holy month of Ramadan, when the faithful observe a dawn-to-dusk fast, would begin at sunrise Saturday.

But the raging war in Ukraine, which has sent energy and food prices soaring across much of the Arab world, cast a shadow this year over Islam’s holiest month, when large gatherings over meals and family celebrations are a tradition.

Many had been hoping for a more cheerful Ramadan, after the coronavirus pandemic cut off the world’s 2 billion Muslims from cherished Ramadan rituals for the past two years. Instead, many find even the most basic items are too expensive to buy this year.

The Saudi statement — based on a moon-sighting methodology — was broadcast on the kingdom’s state-run Saudi TV.

“We solemnly pray that God continues to bestow his blessings and mercy on our beloved country and people everywhere,” he wrote on Twitter.

In Beirut, celebrations were muted and many residents expressed shock at the surge in food prices, which have soared further after Russia’s invasion of Ukraine last month.

The Lebanese have been facing their nation’s worst economic crisis over the past two years as the currency collapsed and the country’s middle class was plunged into poverty. The small Mediterranean country’s meltdown has also brought on severe shortages in electricity, fuel and medicine.

“It is not like every year, because most people don’t have electricity to buy items to store and prepare themselves for Ramadan,” said Moheidein Bazazo, who owns a grocery shop in the Zoqaq el-Blat neighborhood in Beirut.

Many shelves in Bazazo’s shop were empty on the eve of Ramadan. He said he was even struggling to get flour, buying it on the black market at high prices.

Hassan Ibrahim, a shopper, said he couldn’t keep up with the prices. “Only those who are stealing or selling drugs or politicians can live. Other than that, no one else can,” he said.

Some among Lebanon’s Shiites, as well as Shiites in Iran and Iraq, were marking the start of Ramadan a day later, and would begin fasting on Sunday.

Jordan, a predominantly Sunni country, also said the first day of Ramadan would be on Sunday, in a break from following Saudi Arabia. The kingdom’s Petra news agency said the Islamic religious authority was unable to spot the crescent moon indicating the beginning of the month.

It was not immediately clear if Jordan’s decision had political motives. In 2019, Jordan and the Palestinian Authority in the West Bank were at odds with Saudi Arabia for the first time in recent history in declaring what day Ramadan would end on. At the time, this was believed to be a veiled protest against Saudi Arabia and Gulf Arab countries’ support for then-President Donald Trump’s plan for the Mideast, which many saw as favoring Israel at the expense of Palestinians.

In Afghanistan, where the Taliban seized control of the country last August, the high court announced the first day of Ramadan would be Saturday, said Taliban spokesman, Zabihullah Mujahid, in a tweet. Pakistan, where Sunni Muslims are the majority, would begin fasting on Saturday.

Muslims follow a lunar calendar, and a moon-sighting methodology can lead to different countries declaring the start of Ramadan a day or two apart.

With Russia’s invasion of Ukraine, millions of people in the Middle East whose lives were already upended by conflict, displacement and poverty — from Lebanon, Iraq and Syria to Sudan and Yemen — are now wondering where their next meals will come from.

Ukraine and Russia account for a third of global wheat and barley exports, which Middle East countries rely on to feed millions of people who subsist on subsidized bread and bargain noodles. They are also top exporters of other grains and the sunflower seed oil that is used for cooking.

In Cairo, where Ramadan tradition sees colorful lanterns and lights strung throughout the city’s narrow alleys, shoppers turned out earlier this week to stock up on groceries and festive decorations, though many could not afford to buy as much as last year.

Egypt is the world’s largest wheat importer and has sourced most of its wheat imports from Russia and Ukraine in recent years. The country’s currency has also taken a dive in recent days, adding to other pressures driving up prices.

“We were going to be affected, at any rate. We just pray that God will make this pass,” said one customer, Hassan Ali Hassan.

In the Gaza Strip, only few people were shopping Friday in markets usually packed at this time of year. Merchants said Russia’s war on Ukraine has sent prices skyrocketing, alongside the usual challenges, putting a damper on the festive atmosphere that Ramadan usually creates.

Families across the region often go on shopping sprees before Ramadan to pick up dates, special Ramadan desserts and decorations. During Ramadan, Muslims must abstain from all eating, drinking or smoking from dawn to dusk each day for the entire month.

In Doha, the capital of Qatar, Ramadan preparations this year went hand in hand with preparations for the FIFA World Cup tournament to be held there in November. The lights that usually decorate the streets for Ramadan also had signs celebrating soccer’s biggest event and fans danced under flags that represents various countries.

Iman Abou Akar, a Palestinian resident of Qatar, said this year’s preparations were free from some of the many pandemic restrictions that marked the past two Ramadans.

“This year it is smaller numbers, fewer restrictions, and we are going into the World Cup as well, so we get to experience Ramadan better,” she said as people shopped in the city’s Souq Waqif.

At al-Zawya traditional market in Gaza City, people walked through the narrow alleys flanked by stalls showcasing Ramadan lanterns, desserts, and food. They inspected the goods, but were not buying much.

“Prices are 150% up. You can’t buy nuts, foodstuffs, flour, and sugar as in the past, it is all so expensive now,” said one shopper, Mazen al-Muzanar.

The living conditions of the 2.3 million Palestinians in the impoverished coastal territory are tough, compounded by a crippling Israeli-Egyptian blockade since 2007.

Last year toward the end of Ramadan, a deadly 11-day war between Gaza’s Hamas rulers and Israel took much joy out of the festivities, including the Eid al-Fitr holiday that follows the holy month. It was the fourth bruising war with Israel in just over a decade.

Sonee Home launches Ramadan sale; up to 75% off

On this World Smile Day, what’s making you smile?