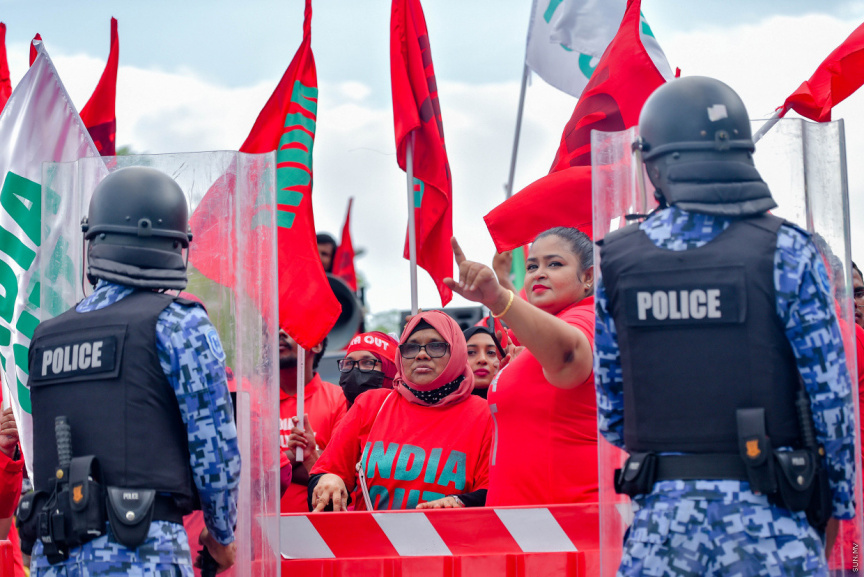 A capture from a protest held as part of the opposition coalition's 'India Out' campaign. (Sun Photo/Naail Hussain)

Police have ordered against holding Progressive Party of Maldives’ (PPM) protest scheduled for this Friday in Male’ City, as part of its ‘India Out’ campaign.

In a statement released today regarding the matter, Police reasoned their order against holding the protest as there were reasons to suspect that the protest will not be held in accordance with the Freedom of Peaceful Assembly Act. They also stressed that the protest posed high risks to public safety and security.

Police also noted having received information that supporters from the atolls will be traveling to Male’ City to take part in the protest.

“The organizers are planning to obstruct public transportation and other services through blocking Male’ roads using a large number of vehicles; seeking out criminal gangs to take part in the protest and are also planning to gather at different areas to make it difficult to patrol the protest,” they further detailed.

Stressing that such a protest defies the law, Police said that they will therefore be searching both vehicles and vessels taking part in the protest.

“Should such a protest be held, it will be dispersed and actions will be taken against individuals violating the law, through confinements of law,“ the statement also read.

Suspect wanted in connection to threat against police