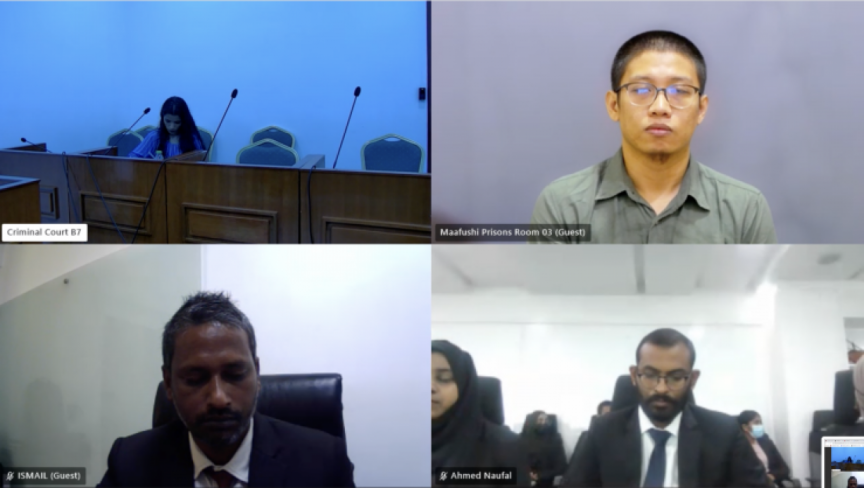 Criminal Court's online hearing in the case against Marvin S. Y. Vargas over the murder of his wife, Mary Grace Oned Pineda held on March 16, 2022.

The prosecution, in the case against Marvin S. Y. Vargas over the murder of his wife, Mary Grace Oned Pineda, a Filipino nurse who worked at Indira Gandhi Memorial Hospital (IGMH), has requested a change of translator over difficulties in Marvin understanding charges read out against him.

A formal arraignment hearing on the case was held at the Criminal Court today, where the prosecution reads out the charges and the defense makes their plea.

At the hearing, the defense had requested the chance to respond to the charges after they receive all the documents required from the prosecution.

However, the prosecution had objected to this. State Prosecutor said that although all documents might not have been received, they do not believe there is any obstruction to responding to the charges at this stage.

The judge presiding over the case, Hussain Faiz Rashad, had concluded that Marvin must respond despite the documents not having been received.

Marvin is a Filipino national, who is not fluent in Dhivehi language. Therefore, the hearings are held with assistance from a translator, who translates what is being spoken in court to English language.

As the hearings are held online, the voice of the translator is fairly low, unclear, or not properly received.

Every time the translator concludes translating, Marvin stated that he understood what was being said. However, his lawyer, Ismail Mohamed, had raised questions as to the extent Marvin comprehended what was being said – requesting the judge clarify this.

Therefore, Judge Faiz had given the opportunity to Marvin to explain what he had understood. Following his response, state prosecutor highlighted there to discrepancies between the charges read out and what he understood.

“As the defense lawyer has stated, the prosecution also understands translation is not that efficient. So, proceedings with the hearings by the appointment of another translator or by any other arrangements seem like the best course of action in protecting the rights of the defendant,” the state prosecutor had said.

After listening to the remarks by both sides, Judge Faiz also noted that there were issues in translation such as the transmission of voice. Therefore, he had postponed the formal arraignment hearing to another day.

Judge Faiz stressed that the next hearing will be held in person, at the Criminal Court, requiring the attendance of all parties. He also this timeframe between the two hearings as a chance for the defense to review the documents and prepare to make their plea.

Marvin was charged with murder with intent, in connection to Mary’s death, on January 4. He is accused of injuring Mary’s head and neck and strangling her to death at her apartment on the first floor of Ma. Udhuheykokaage in Male’ City on the afternoon of October 19, 2021.

In addition to Marvin, his lover, Haleemath Lamha Abdul Rahman, has also been charged in connection with Mary’s murder. Lamha is accused of co-conspiring with Marvin to murder Mary, and assisting in and facilitating her murder. She faces a minimum of 6 years in prison if convicted of the charge.

Both Marvin and Lamha are also nurses working at IGMH.