Commissioner of Prisons: Must remain vigilant regarding extremists recruiting detainees at prisons 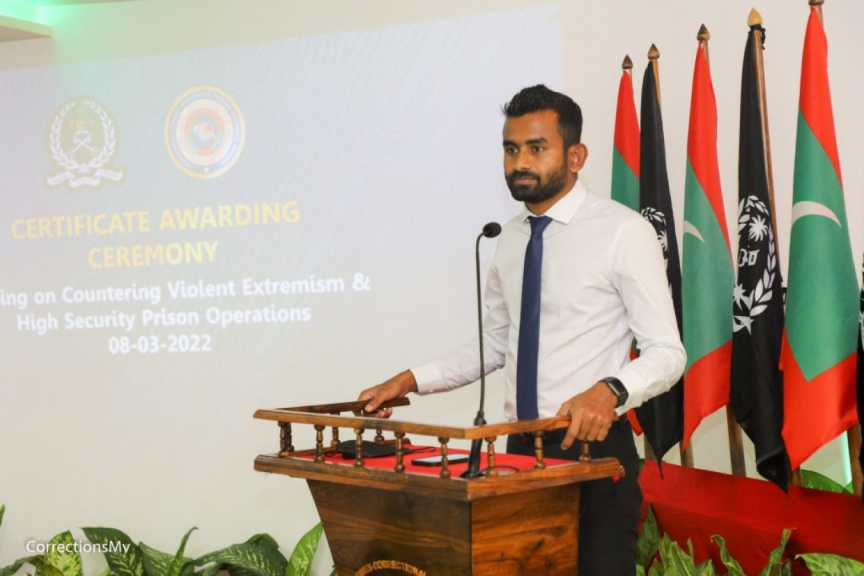 Commissioner of Prisons (CP) Ahmed Mohamed Fulhu has stressed that prison officers should be vigilant over the case of extremist individuals recruiting detainees at prisons.

CP Ahmed Mohamed Fulhu had remarked this whilst speaking at the closing ceremony of the training program, Principles and Concepts of Counter Violence and High-Security Prison Operations, conducted for prison officers by Maldives Correctional Service. The ceremony was held at Maafushi Prison today.

Speaking at the ceremony, CP Ahmed Mohamed Fulhu stressed that propagating extremism in the name of religion is a dangerous and serious issue faced by the whole world today.

He added that he hopes participants of the training program carry out their social responsibility of combatting religious extremism within prisons and apply the knowledge attained through the program in their work environment.

Corrections said that the purpose of conducting this program is to create awareness amongst prison officers on combatting extremism within prisons.

They also noted that a Special Management Unit (SMU) has been established at Maafushi Prison in order to rehabilitee such detainees.

A total of 28 prison officers from Maafushi Prison took part in this training program.

'New buildings to expand rehab will be done this year'

Fayyaz’s side wins to delay election of MDP Chairperson