At rare UN session, Russia is pressed to stop war in Ukraine 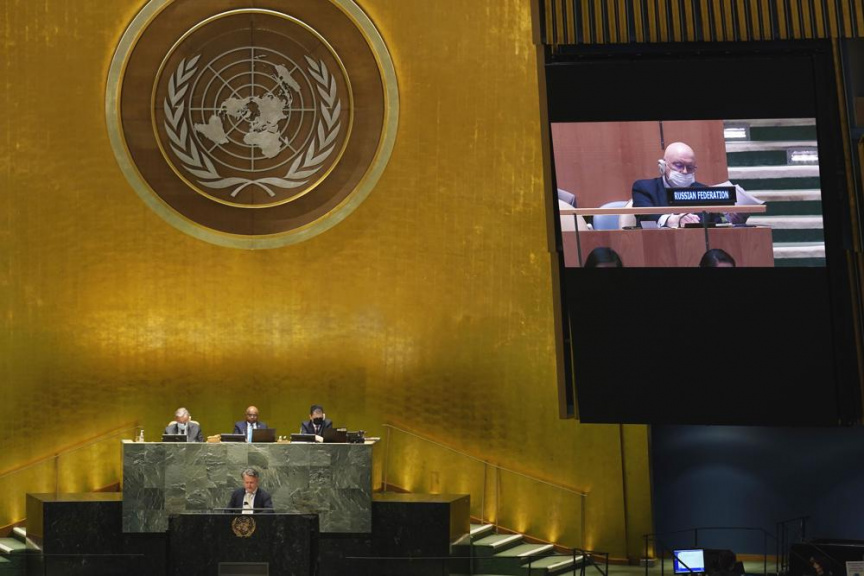 UNITED NATIONS (AP) — Ambassadors from dozens of countries on Monday backed a proposal demanding that Russia halt its attack on Ukraine, as the U.N. General Assembly held a rare emergency session during a day of frenzied and sometimes fractious diplomacy surrounding the five-day-old war.

Reflecting escalating global alarm, both of the U.N.’s major bodies — the 193-nation assembly and the smaller, more powerful Security Council — took the unusual step of holding simultaneous, hastily scheduled meetings on the war. In Geneva, the U.N. Human Rights Council voted to hold its own urgent session.

Tension permeated the diplomatic discourse: The Security Council meeting opened with the news that the United States was kicking out 12 Russian U.N. diplomats whom Washington accused of spying.

Meanwhile, Russian and Ukrainian officials held talks on the Belarus border, agreeing only to keep talking.

“The guns are talking now, but the path of dialogue must always remain open,” U.N. Secretary-General Antonio Guterres told the assembly. “We need peace now.”

Russian Ambassador Vassily Nebenzia reiterated his country’s assertions that what it calls a “special military operation” in defence of two breakaway areas in eastern Ukraine was being misrepresented.

“Russian actions are being distorted and thwarted,” he complained. Russia has repeatedly sought to blame Ukraine for what Moscow claims are abuses of Russian speakers in the eastern enclaves.

“The Russian Federation did not begin these hostilities that were unleashed by Ukraine against its own residents,” he said. “Russia is seeking to end this war.”

The assembly session came three days after an attempt to condemn and stop Russia’s attack ran into a Russian veto in the Security Council.

The assembly will give all U.N. members an opportunity to speak about the war. More than 110 signed up to do so, with speeches to continue Tuesday. The assembly, which allows no vetoes, is expected to vote later in the week on a resolution coordinated by European Union envoys, working with Ukraine.

The draft resolution, obtained by The Associated Press, demands that Russia immediately stop using force against Ukraine and withdraw all troops. It urges an “immediate peaceful resolution” through dialogue and negotiations, and it deplores what it calls Russia’s “aggression” and the “involvement” of Belarus, which is siding with Moscow.

Assembly President Abdulla Shahid opened Monday’s session by asking all envoys to stand for a moment of silence. In hours of speeches afterwards, dozens exhorted their colleagues to vote yes.

“With the Security Council having failed to deliver against its responsibilities, we, the General Assembly, must now stand up to play our part,” said New Zealand’s ambassador, Carolyn Schwalger.

Austrian Ambassador Alexander Marschik appealed to those who have good relations with Russia, saying that “a good friend, an honest friend, will speak up and say what needs to be said and what needs to be done when a friend commits an illegal and evil act.”

But Russian ally Syria accused the West of a “politics of hypocrisy,” noting that various other conflicts over the years haven’t gotten such special attention.

“This historic emergency session on the situation in Ukraine completes the anti-Russian campaign that finds its origins in the provocative and hostile rhetoric towards Russia, propagated by the West to stoke tensions in Ukraine” and compromise Russia’s security, Syrian Ambassador Bassam Sabbagh said.

China, another Russian ally, called for respecting all countries’ sovereignty and internationally recognized borders but didn’t directly address the resolution.

Instead, Ambassador Zhang Jun encouraged fostering a conducive atmosphere for Russian-Ukrainian talks and frowned on “any approach that may exacerbate tensions.”

“Nothing can be gained from stirring up a new Cold War, but everyone will stand to lose,” he said.

The Security Council meeting later Monday was focused on the humanitarian impact of Russia’s invasion, but the session began with a prickly exchange about the Russian diplomats’ expulsion from the U.S.

Nebenzia bristled to the council that the expulsions were “yet another hostile step” by Washington. U.S. Deputy Ambassador Richard Mills said the dozen diplomats were engaged in undiplomatic activities.

Olivia Dalton, a spokesperson for the United States’ U.N. mission, later said in a statement that the 12 were “intelligence operatives” who were “engaging in espionage activities that are adverse to our national security.” Nebenzia, in remarks to The Associated Press, dismissed the assertion as a pretext.

With the U.N. saying the war is creating an already alarming and potentially massive humanitarian and refugee crisis, France and Mexico planned to propose a humanitarian-focused Security Council resolution. French Ambassador Nicolas de Riviere said Sunday it would “demand the end of hostilities, protection of civilians, and safe and unhindered humanitarian access to meet the urgent needs of the population.”

U.N. humanitarian chief Martin Griffiths said there has been “alarming” scale of civilian casualties and damage to civilian infrastructure in the war’s early days, pointing to aerial attacks and fighting in urban areas disrupting essential services, including health, electricity, water and sanitation.

U.N. refugee chief Filippo Grandi said 520,000 refugees from Ukraine are in neighbouring countries and the number keeps rising. The U.N. is planning for up to 4 million refugees in the coming weeks if the conflict doesn’t end, he said.

“We know that we are not even scratching the surface to meet the needs of Ukrainians,” Grandi said.