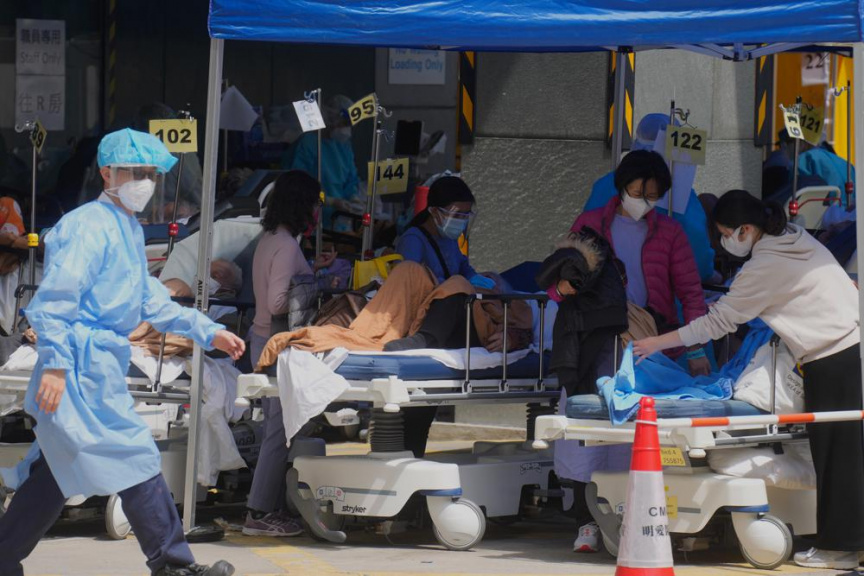 Hong Kong is grappling with a coronavirus surge driven primarily by the omicron variant. Daily cases have more than quadrupled from a week ago, when the city reported over 7,500 infections.

“Once every three days the case number will double,” said Albert Au, principal medical and health officer of the city’s Centre for Health Protection during a daily virus briefing. “We think that the number will continue to climb.”

The city also reported 87 deaths Monday, including 67 people who were unvaccinated.

Health authorities said the government could implement measures that may involve “asking people to stay at home,” and that it remains to be seen whether it would be done via legislation or other means.

Hong Kong health minister Sophia Chan said during a radio program Monday that the government is “still discussing” the matter of a lockdown to reduce the flow of people and maximize the effectiveness of mass testing.

Some supermarkets had their shelves wiped bare as residents stockpiled daily necessities after rumours circulated on social media that there was a vote in the legislature to lock down the city for a week.

The legislature denied that such a matter was being discussed.

“The Legislative Council (LegCo) Secretariat is aware of various recorded voice and text messages being widely spread in the society, claiming that LegCo is undergoing legislative work and counting votes for imposing lockdown which prohibits members of the public from leaving home for seven days,” it said in a statement Monday.

“The Secretariat clarified today (February 28) that LegCo and its committees have not conducted any discussion on the matter, and reiterated that all meetings of LegCo are open, transparent and broadcast live.”

Hong Kong leader Carrie Lam, who visited the Shenzhen Bay Port on Monday night to welcome a group of mainland experts into the city, said to reporters that the government was still assessing whether a lockdown will be implemented to prevent residents from leaving their homes during the upcoming mass-testing exercise.

Lam had previously said a citywide lockdown was unrealistic as certain groups still needed to go out and work during the epidemic.

Authorities have extended social distancing measures, such as a ban on restaurant dining after 6 p.m., to April and brought forward summer holidays for students to March so that schools can be turned into testing centres, isolation facilities and vaccination premises. Students who have their holidays moved forward are likely to attend school through the summer, though international schools in the city are not affected.

Mainland authorities have sent expert teams and medical resources to Hong Kong, as the city rushes to build temporary isolation facilities to cope with the surge in infections.

Hong Kong is still aligning itself with mainland China’s “zero COVID” policy to totally stamp out outbreaks, even as most of the world has opted to live with the virus.

Authorities have taken drastic measures over the last two months, including locking down residential estates where clusters of infections have been detected and quarantining and mass-testing close contacts of infected patients.

Hong Kong has reported 205,780 infections so far, with 744 deaths. Nearly 94% of the city’s total case count has come from its current wave.

Ship sinks in storm off Hong Kong, crew in danger