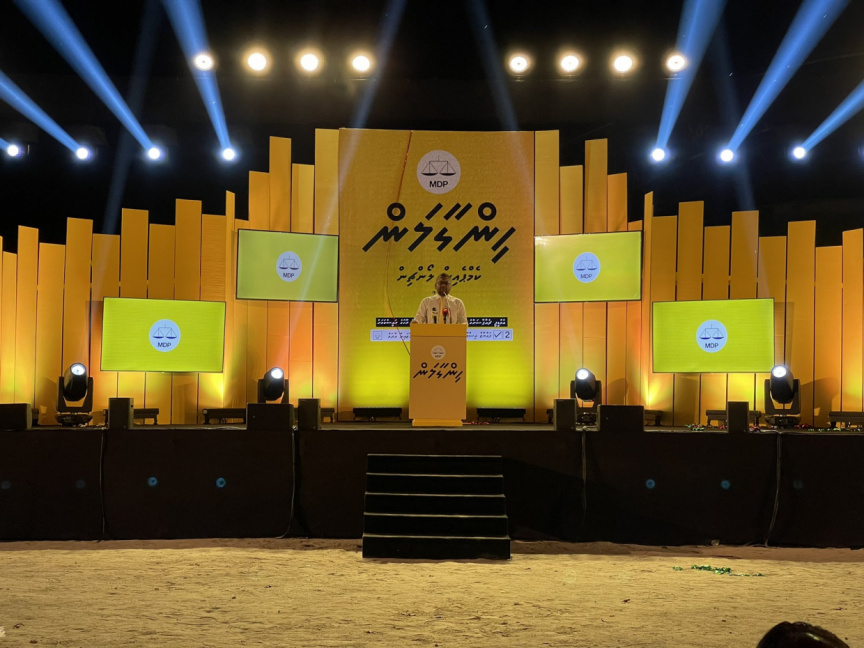 Speaking at the celebration “Hingaalan” held in Sh. Milandhoo to kick-off his campaign for the party’s chairperson, Minster Fayyaz noted that in 2012, after resigning as President, former President and Speaker of Parliament Nasheed had repeatedly said that “this ship will not sink”.

However, Fayyaz expressed his belief that the “ship” has now slowed down, and was in need of repairs.

“Today, how the party is run does not match its size. Not at level party members deserve. Our party’s work is really at an embarrassing level.”

He went on to state that if they do not organize the party’s work better, pick up speed and work to stick to the party principals, they may lose all the success attained so far.”

Fayyaz also said that MDP was a party of togetherness, where there is space for every single person.

In addition to this, he stated that it was questionable whether the work was being done by women and youth members for the party’s progress were actually being appreciated.

“I do not believe we use the voice of women and youth to an acceptable level, in shaping MDP’s work.”

Speaking in this regard, he assured to priorities doing the work needed to push women to the frontline of the party, should he be elected as party chairperson.

Moreover, Minister Fayyaz said that by the time campaigns conclude for chairperson, the party would be prepared for the upcoming Presidential Elections in 2023.

“If I am elected as chairperson, without stopping, as soon as this campaign concludes, will continue the activities, and god willing there will be another democratic government by 2023. I will do everything in my power for MDP to remain in power.”

However, he noted that there was work that needed to be done for the party to win that election, including restarting the smaller offices and branches of MDP.

“While our government is in power, with our supermajority in Parliament, we should be really sad, it is embarrassing that there have been no activities of the party within the last three years.”

In addition to Fayyaz, the North Maafannu MP Imthiyaz Fahumee is contesting in the election for MDP’s chairperson.