Yameen: Uthuru Thila Falhu is a place filled with danger; an Indian military base 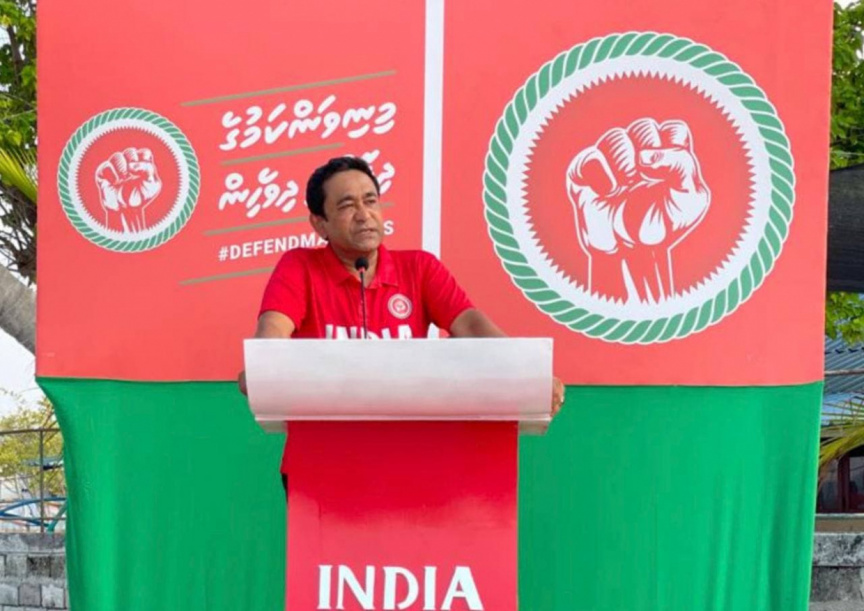 Opposition leader, former President Abdulla Yameen Abdul Gayoom has stated that Uthuru Thila Falhu (UTF) is a place filled with danger – adding that it is an Indian military base.

Yameen had remarked this whilst speaking at a rally held at R. Meedhoo, as part of the opposition coalition's 'India Out' campaign.

In this regard, Yameen said that Indian military personnel has stationed themselves across different areas in the Maldives – citing at least five areas.

"The government had kept saying there were no Indian military personnel. They later changed this to some personnel are there – but that it is to provide us with different technical expertise," he had said.

"So far, senior government officials and governemnt authorities have been saying that UTF agreement was made at their request; something done for them. No. This is a big lie," he had said.

Despite this, Yameen said that UTF is filled in Indian military personnel at present, in the name of developing the place or establishing the required resources at the base.

He alleged that Indians were not developing the place. In this regard, he accused that as per the UTF agreement  – development, mangement and adminstration of UTF lies with the Indian military.

"And the Maldivian government does not have the power over any amount of Indian military personnel or any ranked officers coming here," he added.

In addition to this, Yameen also alleged that the UTF agreement states that it cannot be disclosed to a third party. He reasoned this as why the agreement has not been disclosed to the Parliament.