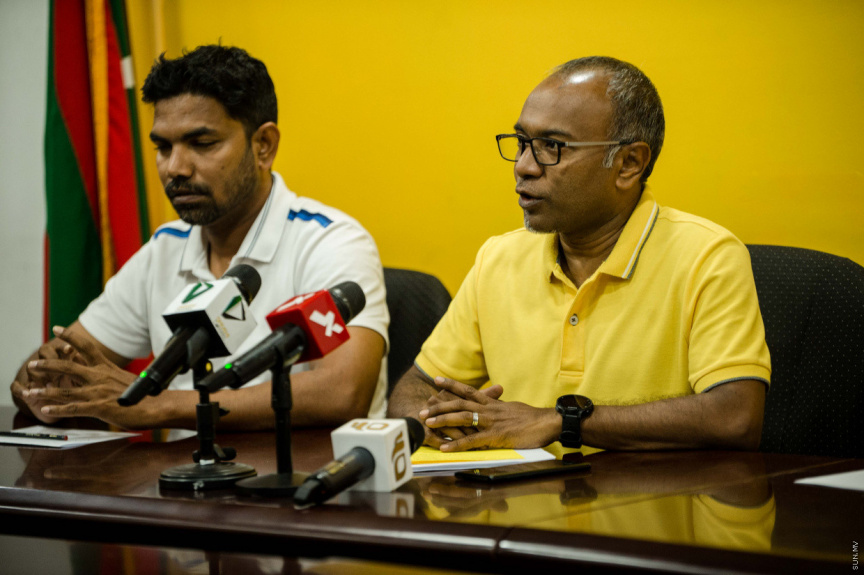 Chairman of MDP speaking during the press conference held after the party's victory in the Komandoo by-elections. (Sun Photo/Mohamed Naail Hussain)

The ruling Maldivian Democratic Party (MDP) stated that today's by-election held for the Komandoo constituency of the Parliament showed the support for their ‘Agenda19’ campaign.

The result for all but one box has been announced. From the temporary results, MDP’s candidate Mohamed Raashid leads with 1,119 votes. His closest opponent was the candidate for the Progressive Party of Maldives (PPM) Moosa Fathuhee, who received 924 votes.

Following their victory, MDP held a press conference, where the party Chairperson Hassan Latheef while responding to a question stated that a similar victory to ‘Agenda 19’ was not seen today since three candidates were contesting.

"In the elections concluded today, three candidates contested, hence it is normal to receive fewer votes than just two contests. If three candidates are contesting, the difference would be seen in the candidate with the highest votes.”

He went on to state his belief that today’s election showed the support for ‘Agenda 19’.

“Even from the Komandoo constituency, the support for ‘Agenda 19’ was seen. No Maldivian has any confusion regarding the work done under ‘Agenda 19’.

Furthermore, he noted that about 70 percent of the work of the campaign has been concluded by the Parliament.

‘Agenda 19’ was the main campaign slogan used by MDP during the Presidential campaign in 2018.

'Result of gov's projects, no influence on election'