President Solih: MMPRC probe will commence once members are appointed to ACC 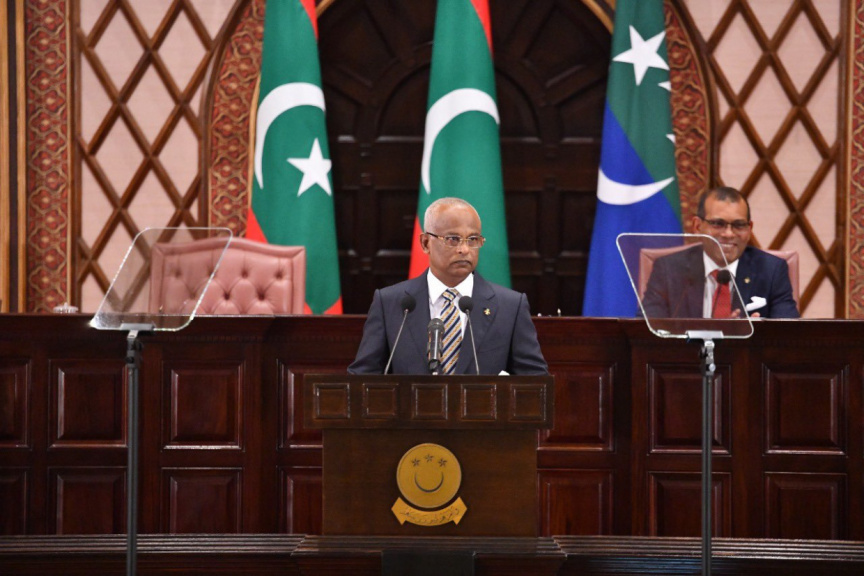 President Ibrahim Mohamed Solih delivers annual presidential address at the opening sitting of the Parliament for the year on February 3, 2022. (Photo/People's Majilis)

President Ibrahim Mohamed Solih has stated that the legal proceedings of the Maldives Marketing and Public Relations Corporation (MMRC) graft scandal will commence as soon as members are appointed to the Anti-Corruption Commission (ACC).

In delivering the annual presidential address at the opening sitting of the Parliament for the year 2022 – President Solih said that the biggest investigation carried out by the Asset Recovery Commission which is mandated to probe embezzlement and corruption of state assets is the MMPRC graft scandal.

Asset Recovery Commission was formulated by President Solih in November 2018, for the purpose of investigating and taking action on MMPRC’s graft scandal by the sale of resorts and billions of money that was embezzled from state companies.

Noting that the Commission has uncovered much information regarding the case – President Soluh said that their findings will be submitted to ACC as soon as new members are appointed.

“The Commission has decided to submit their findings to begin legal proceedings. My hope is that members will be appointed to the ACC as soon as the names are forwarded to the Parliament,” he had said.

He also noted the next phase of the investigation will be carried out by the newly formed ACC.

During the presidential address, President Solih also touched upon the work carried out by the Commission on Disappearances and Deaths (DDCom). On this note, he stressed that justice for forced disappearances and deaths in unknown circumstances has been delayed for longer than he had hoped.

Additionally, President Solih said that DDCom has informed him that their findings on the investigation into the disappearance of the journalist Ahmed Rilwan will be presented to him by the middle of this year.

“The Commission has been conducting the investigation into the disappearance of the journalist Ahmed Rilwan with the utmost priority. More than 200 people have been questioned by the Commission so far. Financial transactions have been analyzed with the assistance of a foreign financial expert,” he detailed.

President Solih also noted that disruptions previously faced by DDCom in looking into the murder of Yameen Rasheed due to the ongoing nature of the court case are no longer present – therefore are currently proceeding with the unfinished phase of the case.

Parliament’s Independent Institutions Committee decided in November 2021 that they would recommend the dismissal of members found to be underperforming following their review. Following its review – the Committee voted to initiate the process of dismissal of all members of ACC in early December as they uncovered the Commission had over 16,000 pending cases.

The remaining members; the commission’s president Mariyam Shiuna, vice president Fathimath Anoola, and Aishath Abdulla – tendered their resignation a day after the no-confidence motion was taken.

34 individuals put forth applications for ACC membership following the vacancy resulting from the resignation of all members.

The President will be forwarding the names of chosen applications for the Parliament for approval as the Parliament has opened for its first session of the year today.